Mom finds something white stuck inside her son’s mouth, when she checks it out she discovers a big health problem

She Also Found 26 More Pieces and Had to Pull Out Each Piece One by One From His Gums.

Most parents take great care of their children's health, but despite their efforts, surprise health scares can still happen to your children.

One mother had one of these scares when she filmed what she found inside her son's mouth. Her discovery quickly became a viral story.

In a Facebook post, mother Sara Guidry said her son Kale has always kept her on her toes. One day, she noticed something strange and white inside her son's mouth. She got out the tweezers and pulled out a finger nail embedded in his gums.

When she removed it, she was surprised to see more fingernails in his mouth. "I then search his mouth and find another area. I pulled around 27 out of the second spot" the surprised mother said on her post.

Guidrysaid there's a rather simple explanation for this bizarre health risk: "The dentist has never seen anything like this. We figured out that Kale bites his nails and plays with them in his mouth. He pushes them up towards his pallet. The nail penetrates the skin and goes into a pocket between the baby teeth and permanent teeth."

She also urges parents to not let their children bite the nails.

Why do people bite their nails?

It's a compulsive habit, which over time can cause cuticle deformation, warts, infections, damage to your teeth as well as fungal or bacterial infections. It can even cause total loss of the nail, according to Huffington Post.

In a personal narrative on NPR by a "recovered nail biter", the author outlines the psychological damage caused by her behavior. It took decades for Amy Standen to stop her habit. "I never stopped. It was embarrassing - like wearing your neuroses on your sleeve. At parties, I learned to wrap my fingers all the way around my wine glass, so that my nails faced my chest. I hated filling out forms in public places" the author comments.

While the young boy, Kale, probably hasn't realized the psychological consequences of his habit, his mother and dentist probably outlined how his habit of biting and chewing on his nails is a serious health risk.

How to help your children

Therapy with a specialist can help sooth anxiety in your child if you feel this habit stems from stress. Keeping nails short can also help deter children from biting their nails.

Chewing gum or eating a candy, exercising or having some kind of activity to do instead of biting on their nails is also a great way to help your kid stay away from this nervous habit.

Nail biting is a habit that can be modified with effort and perseverance. Inform your child about the consequences of their habit and work constantly together to try to stop the nail biting. 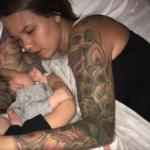 Father Publishes Loving Photo of His Wife and…