My baby did not fit the mold

I Read the Books and Thought I Was Ready. But I Was Very Wrong.

I was prepared. I read the books. I took the classes at the hospital (I even made my husband come along). I knew what to expect, I knew what I was in for and I was ready.

Not even a little bit, not at all.

What was wrong with my baby?

Why didn't my baby fit the mold? Obviously the books and teachers wouldn't lie ....

The more forums and blogs I read, the better I felt. With all the books and classes out there, why would there need to be so many forums for mothers to ask questions?

Maybe my baby wasn't so different.

Maybe the books do lie.

Here are a few examples of how my baby (and maybe yours too) didn't fit the mold.

Oh, did I feel like failure. EVERYTHING I read about breastfeeding told me that the baby didn't need much milk the first few days. "Colostrum was all they would need." "Trust us that your baby has enough."

Except my baby screamed and screamed. Around. The. Clock. And he lost too much weight. And he became jaundiced. The lactation consultants told me it was all normal.

Three days later, his doctor told me that if I didn't feed him formula we would be checking back into the hospital. The baby had cried for three days straight. I gave him one ounce of formula and the world was quiet again.

The world was quiet again at least until I began crying because I'd been starving my baby. Guess what - that formula did not ruin our breastfeeding. Once my milk came in, he never had another ounce of formula.

He couldn't be put down ever!

We had the bassinet and we had the swing. We had a bouncer. None of it worked. My friends and family brought me every contraption known to man.

Nope. This baby would not be put down.

People would blame me. I'm pretty sure my husband still blames me. "You've spoiled him" they would say. But it wasn't me. I did try to put him down .... each and every day. Do you honestly think I didn't want to EVER have a minute to myself?

The first three months of his life were spent in my arms. I had to hire a nanny because he couldn't go to daycare.

He couldn't be put down. I'm not lying to you.

Co-sleeping was my saving grace

Trust me, before I had the baby I would have preached all day long about how he was going to sleep on his own from day one. What did I know? At some point you give in because your survival instinct kicks in.

Do you know how many people told me something along the lines of "all babies love the car" or something to the effect that I was in fact making up that mine did not?

I essentially became a hermit. I dreaded outings. There was this one time I had to take him to a specialist an hour away. He screamed the entire time. He was two weeks old. I am forever scarred by the trip.

It never stopped. He is seven months old now and still hates the car. People still tell me I'm lying.

I am not lying.

Some babies eat all the time!

I read that newborns eat every 2-3 hours. My doctor told me not to feed more often than every 3 hours (4 hours at night) no matter what.

My baby ... well he told me something different.

My baby ate around the clock, often every hour. For a couple weeks I tried to stretch the time between feedings. He cried. I cried. I gave in. He was happy. Repeat.

And then one day (with the support of a local breastfeeding group), I asked myself why.

Why was I caring so much about how often he ate?

Life got a lot less complicated after I came to that realization. He was happier, and I was most certainly happier. Four hours between feedings at night? Are you kidding me doctor? We were lucky to make it to two hours (hence the co-sleeping).

So here is the thing:

Some babies don't fit the mold. Mine sure didn't. I'm beginning to wonder if any do.

Is there a mold at all? Even if there is, I'm not sure how many babies fit into it. I don't know who is writing those books and teaching those classes. I honestly wish I hadn't wasted my time. I wish I hadn't expected my newborn baby to fit into some sort of nonexistent mold.

Most of all, I wish I hadn't tried to force him into that mold just so that he would be "normal." What is normal anyway?

Editor's note: This article was originally published on Engineered Motherhood. It has been modified and republished here with permission.

Melissa Ricker is a mother, a wife, a nuclear engineer and a professional freelance writer. She runs a blog aimed at helping working mothers find a balance between growing their careers and growing their families through a series of helpful hints, productivity tips and technology hacks. She wants every mother to know that she can have both a career and a family without constantly feeling torn between the two.
nextarticle 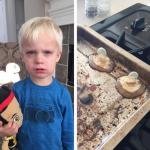