Outdoor games for a group

A bevy of games that will keep families entertained and outdoors! Try these at your next reunion, company picnic or just for the gang in the neighborhood.

When I was a kid, it was a different era. We'd go out after breakfast in the morning, maybe come home for lunch, but often not until dinner. We played lots of games outside, but that is not so common these days. Kids spend a lot of time indoors. Here are some fun games to get them moving. Perfect for youth groups, neighborhood kids, reunions, company picnics or block parties. Just remember, don't forget the sunblock!

Divide into two teams and supply all members with a short length of PVC pipe cut in half to form a conduit. Members of each team have to stand side by side, linking up their conduit and a golf ball is put in the first one. When the golf ball has left your pipe and gone onto the next person's, that person has to now run to the end of the line. The object is to keep the ball rolling continuously, so you have to slightly tilt your pipe. Keep going until someone drops the ball. Then, start again.

This is a lot of fun and teaches a lesson as well. A large group of people stand crowded together and close their eyes. Now everyone must reach out and grab another hand with each of theirs. Once each person has blindly grabbed two different hands with his own, everyone opens their eyes and keeps hold of the hands they grabbed. Systematically "unravel" the mass of arms and you will find that there will, without fail, be unbroken circles of people. This takes some real negotiation, leadership, making and following suggestions and a little bit of contortion. Some may be facing one way or another, but there will be circles. It's pretty amazing and I don't know how it works, but it does. This game is a great lesson in patience, unity and problem-solving.

This requires a barrier of some sort, like tarps on a clothesline. Divide into two teams. Members of the teams divide into "ships" from two to five people in length, standing side by side. Use whatever people you have to form whatever ships you want. Now a member of each team, alternating teams, throws a water balloon over the barrier, trying to hit a ship on the other team. All must remain stationary and accept the hit if it comes their way. If a ship is hit, those making it up are out of the game. Attempt to sink the other team's ships first.

Have everyone take off their shoes and put them in a pile, then return to a place behind a line. Mix the shoes up. Line up in two lines. One by one, team members have to go in, find their shoe, put it on, and return to the back of the line. The team that finishes first wins.

Hand everyone a water balloon and when someone says "go" everyone has to try to pop their balloon only by sitting on it. They are harder to pop than you might imagine. The first wet bottom wins!

Hand each person a card with an animal on it. There should be multiples of them so that players can form groups of like animals. Have players blindfold themselves and find the rest of their "herd" by making the animal sounds only.

Divide into teams of two. One person from each team has to stand on a chair overlooking the other team member lying on the ground. The stander has to build a banana split in the mouth of his team mate without bending over. Banana, scoop of ice cream, topping(s), whipped cream and, of course, the cherry on top. First one to actually build a sundae in his mate's mouth wins. Have a hose handy!

Divide into teams of two (perhaps switch off from the banana split game). One member covers the face of the other with whipped cream and then moves back behind a line (a few feet away) and throws cheese puffs at the face of his mate. When time is called, whoever got the most cheese puffs to stick wins.

Javelin throw with a straw. Use a paper plate as a discus. Make the shot put a marshmallow or cotton ball. Use your imagination to make up other events.

Try an egg toss, three-legged race, sack race, egg on a spoon in the mouth race or a wheelbarrow race. They are classic, but still loads of fun.

Some of these require equipment, some are messy, but all are guaranteed fun for the crowd. 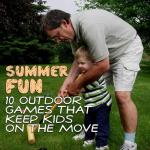