Your children are digital natives. They will never know a world without the Internet, texts or cell phones until they are replaced with new technology. Tips and tricks for parenting a digital native who knows more about your cell phone than you do.

I looked around the restaurant and saw small children with iPads or tablets everywhere. Every time a child fussed or cried a tablet seemed to magically appear. Parents were frantically changing movies to something the kids could agree on. At some tables there were multiple tablets. I was so glad we were talking to our kids and not watching movies.

Then a few minutes passed, the order was late and the kids got hungry and cranky. The arguing and whining began. Suddenly one of the parents I was with whipped out an iPad and asked what the kids wanted to watch. The kids were plugged in and all the parents breathed a sigh of relief, including me. We had stopped talking to our kids. We had medicated them with Disney.

I remember thinking, "What just happened?" One minute we were asking the kids what they liked best about the zoo and facing each other. Now kids were all clumped together so they could see the screen better and the adults were talking to each other. Manners were out the window as we made a mess of the table and chairs to keep the peace.

Our children are digital natives. It is likely they don't remember a world without cell phones, computers or instant movies. John Palfry and Usr Gasser in their book, "Born Digital: Understanding the first generation of digital natives" say, "They were born after 1980 when social digital technologies . . . came online. They all have access to networked digital technologies, and they all have the skills to use those technologies. (Except the baby, but she'll learn soon enough.)"

From birth, our children have been immersed in a digital world containing tablets, laptops, iPads, iPods, video games, cell phones and more. They have learned the language of computers by immersion study at a level we will probably never understand. There is a good chance when you are stumped by the computer, you call your ten year old for help. They understand technology almost intuitively.

Parents often express frustration to me about their attempts to engage their children in conversation. We have used videos to babysit them, but then we are upset when our teens self-medicate and comfort themselves with video gaming systems rather than turning to us for love and a long talk. We drive in cars full of kids and teens texting and not watching the world go by and talking. Upset, we wonder why but forget we bought the phone they are using so that we could reach and communicate with them.

So, in a world gone wireless, how do we keep a relationship with our digital natives?

At some point in time, ancient man asked his son why he never carved stone tablets anymore. As parents, we have to accept that the world has changed. Our children will own fewer books, but will read more. Their information will come in short videos, blogs and news memes on Facebook.

If you can't beat them, join them

I have texted my daughter from upstairs in the same house to call her to dinner and been grateful I didn't have to shout. I texted my husband for an emergency roll of toilet paper. Everything has its positives and negatives. To monitor and interact with digital natives you must understand their technology.

Kids love selfies. Your child's history is going to be more documented than any other generation. The challenge is to encourage kids to not put up anything that will keep them from running for congress. Being involved and excited about what they post allows you to connect with them and hopefully guide them by example. Monitor and advise them, just like you would when shopping for clothes. Teach values like modesty and self-control outside their digital life and let the values show on their Facebook page and Instagram posts. Correct with love when they make mistakes.

Parker Palmer suggests a tech retreat across generations on the Parenting in a Digital Age Blog. A church took teenagers on a one-week pioneer re-enactment. Not only were cell phones and computers banned, the hike was in a remote area without service. The first day the adults had as many withdrawal symptoms as the teens did. By the end of the trek, bonds had been forged that would last for years without media, but media would keep those bonds beyond the experience. Interviewing one of the youth, I found that they were Facebook friends with several of the adults who had chaperoned and continued to be a positive influence on their lives.

Kids connect with others through social media. A good parent knows when you tell a child something is off-limits he becomes totally fascinated with it. But when you make it mandatory, it becomes a bore. Finding a healthy middle ground with technology may involve modeling its use with children in appropriate ways. For example, a call to Grandma becomes a Facetime call. Recently 2-year-old Elliott Dickerson went on a jog with his Grandma along the ocean more than 800 miles away. He called Grandma on Facetime while she was out running. Rather than hang up, she turned on the phone and took him with her. They talked through her headphones about the seagulls and the waves. They connected.

Parents who have visitation with children, can use Skype for group calls face to face at night. Thanks to iPads or tablets, kids can show the distant parent the fort they build in the backyard. The very iPad that kept kids from chatting with parents at a restaurant, now becomes the tool to bring them together. 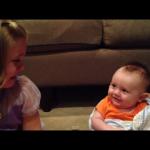 You'll Want to Give This Little Girl a…