QUIZ: We can guess when you’ll get pregnant

Wonder how long it's going to be? Find out!

A study from 2010 found that a woman loses close to 90 percent of her ovarian eggs by the time she hits 30, which can make it harder for her to give birth at an older age. In fact, giving birth later in life also increases the risks of a child being born with health issues, like autism, all because of aging eggs.

But little has been written about specifically why cells age - until now. New research from Yale University has found that a woman's eggs age because the cells are often oxygen-deprived, giving them little nutrients to grow.

"More women are postponing childbearing, but with age, the cumulus cells that surround and nurture the eggs begin dying; we've found that this is caused by lack of oxygen," the study's senior author, Dr. Pasquale Patrizio, director of the Yale Fertility Center, said in a statement. "This follicular hypoxia triggers a cascade of biochemical changes in the cumulus cells. This may ultimately affect chromosomal abnormalities seen in eggs of older patients."

To find this, researchers analyzed samples from 20 cumulus cells from 15 patients who were younger than 35 and from those who were older than 40. They found that there were differences in the molecules in the cells of older patients, which caused cells in the eggs to age.

"Our findings shed light on the mechanisms responsible for human egg aging," Patrizio said. "We have always been intrigued by the questions, 'Who is the time keeper of egg aging?' and 'How are the eggs informed of the biological clock?' Now we know that changes in RNA of the cumulus cells triggered by aging-induced hypoxia, are the key messengers."

This finding may offer medical professionals information about how they can potentially slow down this process in the future. Patrizio said that it's possible medical professionals could screen a woman's cells to see which are oxygen-deprived and then supply that oxygen so that they don't age as quickly.

Ultimately, this could create healthier eggs and even more successful in vitro fertilization treatments, he said.

One company has already worked towards this. OvaScience, a fertility treatment company, said it has a treatment that can improve the mitochondria - which gives the cells the power to divide, grow and create life - and give it a refresher. The company told Live Science that its method involves "precursor cells" that can be taken out of a woman's ovaries and inserted into her eggs to help refresh the mitochondria.

Still, experts are unsure whether or not eggs can be revitalized and made healthier after they age.

"In theory, this might be helpful," Kateryna Makova, a genomicist at Pennsylvania State University in State College, told Live Science. "But how to do this in practice, and how to do this right in practice is difficult to address."

And, according to Live Science, experts have warned attempts to "freshen up" an egg's mitochondria could actually create fertility risks.

Still, fertility doctors are looking for ways to help keep a woman's eggs from aging. In fact, there's a new IVF treatment in the United Kingdom that will soon go under trial that promises to help make aging cells younger. The technique "effectively makes older eggs young again by adding a fresh set of 'batteries' transferred from more youthful cells in the ovaries identified by a scientific process pioneered in the United States," according to The Independent.

These new youthful cells would have an easier time creating life, which would help older woman give birth.

Of course, not all Americans give birth later in life. The average age that women first give birth has hovered around 26 years old in recent years, showing that there are a significant amount of Americans who give birth before their cells start to age.

Luckily for you, we've created a quiz that should help you figure out when you're most likely to give birth. Take it below and share your results with your friends. Is that a rattle I hear? 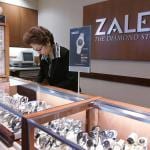 Did You Buy Your Wedding Ring From Kay,…