Raising a Son Whose Father is Not a Good Example

Be the Best Loving, Encouraging Mother You Can Be. Teach Your Son to Be a Good Man and Husband. Teach Him Values and to Respect Women.

Raising a son whose father is not a good example

We may never be able to change the results of a choice. Within the big choices in life, I believe that the choice that needs to be clearly thought out is choosing a spouse - the mother or father of our children.

You are a powerful influence

There is a special bond between mother and son. This bond is sweet and tender. The son wants to love and care for his mother, and wants to be close to her and protect her when danger arises. This is a natural feeling. When the mother knows or realizes this, she has a wonderful opportunity to teach her son to be the best man he can be.

However, if the father is not a good example, is it possible for the mother to take up that mantle and teach her son to be a good, honorable and fair man? How is it possible?

Be a good example

As the child's mother, you need to be a good example. Yes, it's a little cliché, but it's so very true. Words are temporary, but your example is long-lasting. If a mother knows that her son is attached to her and believes what she says, it isn't that hard to teach him and show him the example he isn't getting from his father. Therefore, it is important to be a good example of the virtues and ideals that you want your son to develop. Teach him to be good and virtuous. Teach him to respect women and treat them with respect and to be courteous. Be kind and loving when doing this.

Never talk bad about his father. No matter how tempting it is to make comparisons between "us" and "I." Don't do it. Not talking bad about people is an attribute that you want your son to develop. Teach him to love his father, to be kind to him, to have charity toward him. Teach your son that even though his father may not do the best things or make the best choices, God loves him for who he is despite the choices he has made. Teach him that God loves everyone despite their choices and that he doesn't judge them. This will help him in the future when he is trying to deal with his spouse and trying to be a better father and husband. Make it clear that the choices his father has made and is making are not good choices and he should not follow that example.

Use the credibility that you have with your child to praise him for his successes. Tell him that he is a good boy, a responsible boy and that you are proud of him. When he does something well, praise him, encourage him and show that you appreciate him. Show that you approve of what he has done and admire his potential. Encourage him to develop his own interests and talents.

Love and accept your son for who he is. Many mothers want to raise their children according to their own concepts, ideas and expectations. This can be very frustrating and cause resentment on both sides. Early on in life, children tend to show their true character and natural abilities. Try not to be the "Dictator" of your son's life, forcing him to be what you want him to be at the expense of his natural character and abilities. Respect his wishes and choices. In this, you are giving him the freedom to fail. Encourage him to be the best he can in what he wants to do.

Be firm in your expectations

Firmly deal with his father. If he lives in the same house, do not tolerate physical or psychological violence with you or your children. If this happens, get out and get help! If the father is not bad, but still isn't a good example, teach your children to respect him anyway. Rethink your relationship and if it will not work or change, a divorce may be your only option. If this is to happen, a grandfather or uncle could be the male example that your son needs.

Teach him to honor his parents

Teach him to be a good son. As you were and are a good daughter, he needs to be a good son. Whether or not his or your parents were good examples, the fifth commandment says, "Honor thy Father and thy Mother." To honor someone means to respect, dignify and exalt them. Obeying your father in doing something dishonest or immoral is not honoring him. To honor someone is also to not disgrace your family name. If the father is dishonorable, unjust or immoral in any way, following that example is not honoring your family name.

Teach your children according to your own faith. A mother's faith can influence or even change the life of her child. Be close to your children, play with them, pray for them and teach them to be happy and full of hope. Support them and let them know that they can trust you in telling you their fears, problems and disappointments. Your duty as a mother will change as your children grow and as their needs change, but your love, support and encouragement should never change. 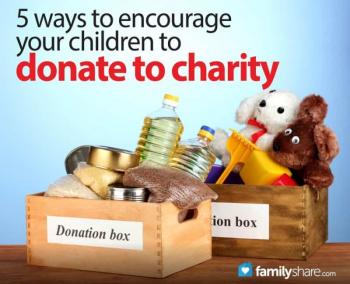 5 Ways to Encourage Your Children to Donate…