We All Want Our Children to Be Successful in Life. The Way to Achieve Success is Through Setting Goals and Then Accomplishing Them. Follow These Steps to Teach the Art of Goal Making to Your Children.

This past fall I ran a 200 mile relay with 11 friends. Due to some injuries to other runners on our team I had to run a longer leg than I had originally planned. It ended up being over nine miles. My total mileage for the race was over 24 miles rather than the 20 I had trained for. As I was running those nine miles I had to keep telling myself I could do it, that it was just a little bit longer, etc. When I handed off our baton I was exhausted, but exhilarated by my accomplishment.

Each time one of your children accomplishes a goal, whether it is mastering the art of shoe tying, writing his name or learning to ride a two-wheel bike, he can feel that same sense of pride in accomplishing the goal set. Aristotle said, "Man is a goal seeking animal. His life only has meaning if he is reaching out and striving for his goals."

Sometimes your children may need some direction in how to set and achieve their goals. The following steps can help set them on a course toward success.

Steve Garvey said, "You have to set goals that are almost out of reach. If you set a goal that is attainable without much work or thought, you are stuck with something below your true talent and potential." So have your child write down some things they would like to accomplish this month, this summer or this year. Each January we have a family night where we discuss goal setting and everyone makes a list of personal goals.

Once you have a goal set, you need to break it into smaller pieces in order to achieve it. Antoine de Saint Exupery said, "A goal without a plan is just a wish." When our daughter ran cross country in high school, she often set a new time goal for the year. In order to achieve that she had to then create a training regimen that enabled her to improve her time with each race. Setting that plan into action is what makes the goal a reality and not just a dream.

Each small success should be recorded so that your child can see her progress toward the final goal. Charts are an excellent way to create a visual reminder of the goal, the steps made and the steps still to be taken to reach the goal. Saul Bellow said, "Whoever wants to reach a distant goal must take small steps." When your child sees the visual chart she can see her success. An excellent website for different chart ideas is www.simplekids.net/goal-setting-charts-for-young-kids-2/.

Most people are natural procrastinators (I know I am). When you have a deadline to accomplish your goal you are less likely to postpone working on it. Brian Tracy said, "Goals in writing are dreams with deadlines." By writing down the goal and the end date you help the dream become a reality.

Success in itself is often a great reward, but sometimes you need more motivation. Stickers on a chart are one form of reward. When our daughter was playing basketball she often didn't play aggressively enough to score. We knew she had the capability, but the drive was not there. We offered her a reward for each basket made. Suddenly she was scoring 10 or more baskets a game.

Teaching your children to set goals and achieve them will enable them to learn to succeed. It also helps them learn that when they first fail, they can pick themselves back up and try again. Having dreams is great, but it is even greater to achieve that dream. Help your children learn to be like Walt Disney who said, "It's kind of fun to do the impossible." 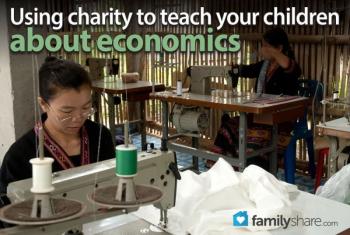 Using Charity to Teach Your Children About Economics