Rotten Things to Say to Your Teen

When You Say, "You Have a Great Personality," You May as Well Be Saying That Your Teen is as Appealing as Spam.

"I say anything I want to my kids and they are all normal and responsible citizens," one lady said to me when I mentioned this essay. I couldn't help but think that, just maybe, her kids could have been normal, responsible citizens with a healthier self-esteem.

Say anything you want to your teen, but know that some of the things you say will have consequences that aren't in anyone's best interest. Here are a few words and phrases to take another look at.

Every parent wants to keep his family grounded in reality. But if there were ever a time to look to the stars and lose footing a bit, it would be when you are young. Young adulthood is for exploring and finding out new things about yourself and the world. Don't stifle your kids with a few poorly placed, "You can'ts."

I am not talking about safety matters, as in, "You can't touch this hot plate when it is red hot." Actually he can. If he does he will get burned but he can still touch it as it is physically possible. So, instead of, "You can't," try, "If you touch this it will burn your hand. Do you know what that would feel like?" It's just a bit different, but so much more effective.

Actually, this phrase in a positive context is a wonderful thing to say. "You are just like your mother - always thinking of others." But on the negative side, "You are so lazy, sitting there watching TV like your weird uncle Harold," it is not so good.

"You are just like ... ," is a self-fulfilling prophecy, so use it when you are encouraging your child toward a positive attribute.

Yes, I know that we all need a little time to ourselves - so say instead, "Why don't you kids go outside for a bit while I take a time out and calm down."

If you tell your children to just leave you alone, they will say the same thing right back at'cha when you ask what's troubling them. And that may be the least of the problems with the phrase, "Just leave me alone." Next time you say that to your child, look at his face. You may never utter those words again.

I wish you were more like your older sister

This phrase will only drive wedges between your children. The message behind this is really that you wish the child was different - something other than what he is. Is that what you want to get across? Instead try, "Your sister tried to be quiet and respectful during church. Watch and see how she does it."

I'm so disappointed in you

It sounds so genteel, like something from Father Knows Best. But it isn't. However, give it a little tweak and it works brilliantly, "I am disappointed in the choice you made to paint the puppies (or, fill in your own blank). Do you want to talk this over a little as we throw them in the bath?"

You are a bad girl

I admit, I freak out a little when I hear this. The child is not bad. If the child is doing something that is wrong or dangerous, then tell her so, or just say, "No." Often, the child will be doing something she has never been taught about. Teach her now - at the moment she throws herself on the dog or decides to watercolor the wall. Make it a learning moment instead of a blaming or name calling moment.

is going to come back to you in spades - and not in the cute and clever ways you are imagining. When it's time to talk about personal relationships or something important, it will get thrown back at you like a pail of water from a circus clown. Sarcasm is a fine tool, but make it an exception to the rule tool.

No, no, no. Don't even go there. Do you remember back a hundred years ago when some adult said something like this to you? It is devastating to a child. It is not their fault that, say, their father left you. If adults cannot take responsibility for their own actions, at the very least they should not blame a child.

, as in, "I will never let you feed live crocodiles." That may very well be true, but stamp something with a never, and they head right for it. Instead, try, "That would be dangerous, but if you really want to and are willing to be known as Spike or ol' Iron leg, then I will sign you up for crocodile feeding lessons for your Christmas present."

Words have meaning. Pick the ones you use with your teens carefully. 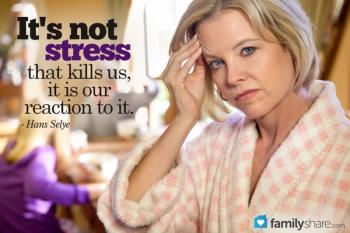 Are You a Burned-Out Mother?