This Research Could Change Everything.

Losing a baby is a traumatic experience no matter how far along you are in your pregnancy. No mom should have to go through that type of pain and agony, but it happens more often than we realize. If you experience a pregnancy loss after 20 weeks, it's considered a stillbirth. According to Babble, "Stillbirth affects 23,600 babies per year, or 1 in 160 pregnancies."

There are some risk factors of having a stillbirth, but doctors haven't been able to figure out what exactly causes it and if it can be prevented. But, some research from Australia might finally have some answers on what causes this heartbreaking occurrence.

The study recorded in the American Journal of Obstetrics and Gynecology (AJOG) tested placentas at different stages of pregnancy to find out if the aging of the placenta has anything to do with stillbirth. They wanted to see whether unexplained stillbirth placentas had the same oxidative damage due to aging as late-term pregnancies had.

Their hypothesis states, "Placentas at [greater than] 41 completed weeks of gestation (late-term) would show changes consistent with aging that would also be present in placentas associated with stillbirths."

This could change (and save) lives

Professor Roger Smith told Australian Broadcasting Corporation (ABC), "It certainly is the most exciting project I've been involved in so far, with the potential to influence people's lives around the planet."

He then compares it to the human body. He says, "As you look around at everybody you know, you'll notice that different people age at different rates ... And it's almost certainly the same with the placenta. Some placentas age more rapidly than others."

This incredible breakthrough could save so many lives, especially if researchers develop a way to monitor the mother's placenta. And Professor Smith has some great ideas on how to do it.

He says that they could develop a test that's able to detect signs of an aging placenta in the mother's blood. If that's the case, then doctors would be able to deliver the baby through caesarean section before it passes away.

This would be incredible for mothers who are more than 27 weeks gestation, but babies younger than that don't have a high chance of survival outside the womb. But Professor Smith has an idea for those babies too.

He says, "If a baby is too early in pregnancy to be delivered, we may be able to give drugs that inhibit that enzyme to slow the aging of the placenta, and allow the baby to stay in the uterus until it is likely to survive when it's born."

Moms, it's not your fault

This information has the potential to completely change everything, and Professor Smith hopes to prevent stillbirth in any way he can. Until they figure out a way to do this, he wants every mom to know that "it's not their fault." He says, "This is something that's happened to the placenta; they had very little or no control over it. There was nothing they could do to prevent it. So they shouldn't feel guilt about it."

It's hard to understand the heartbreak of a stillbirth if you haven't had one, but hopefully this new discovery will bring awareness to the problem and eventually make it so it's not a problem at all. 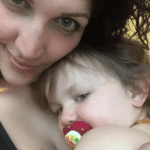 Mom Takes Her Newborn to the Doctor; the…