Should Your Kids’ Obsession With Selfies Scare You?

Demystifying the Selfie Craze. Here's What You Need to Know About Your Kids' Obsession.

It is being called self-indulgent, narcissistic, the downfall of society. It screams to some, "Look at me! I'm gorgeous!" and to others, "Look at me! Am I really as hideous as I think? Tell me I'm not!"

Kids and adults alike engage in this trend of stopping in the middle of a busy sidewalk or sneaking off into a bathroom to shoot a photo of themselves. Not for any particular reason except to capture a moment in time. Those of us who have to wade through the onslaught on social media have a multitude of mindsets. Mine generally hovers around "Man, I wish I felt that cute and comfortable in my skin." Other reactions center around the "Don't they have anything better to do?" or "They must really think a lot of themselves."

Is this really as self-absorbed as it appears to be? Donna Highfill reminds us in her Huffington Post piece, The Ugly Truth About Our Obsession With Selfies, of the old county fair photo booth and how much fun they were. By sneaking into one of those and closing the curtains, one could become anyone or portray herself in any way. She could run the gambit of emotion or clown around or get all kissy-huggy with a potential love, and then take home the reward of 4 pictures for a buck. It was about capturing a moment in time.

Of course, there are those who abuse the practice, making the pictures focus on various body parts that should probably remain covered to the masses, or putting on the "seductive" swollen duckbill pouty lips. Am I the only one who finds that completely unattractive? I'm sure it can reach a point of self-obsession and narcissism.

Pamela Rutledge, PhD, reports in Psychology Today, that we need to stop and take a nice, deep breath. What can easily be perceived as a dangerous trend, is just that. A fad. A trend. A phase. It comes with the transition from posed photos taken with cameras and film that had to be developed to now, when almost every electronic device is equipped with a camera that, in an instant, can shoot a photo and send it to the world of social media. I've seen photos of babies hit Facebook within a minute of their coming into the world. Like that. Bam! Hey, world, here's my new kid. He hasn't even taken his first real breath, but I'm sharing him with you. Let's celebrate.

In truth, when you weed out the selfies taken in scanty clothing looking provocative, there are so many more that capture a moment of pure joy, maybe with a bestie, for all the world to see.

The message to parents.

The "selfie" is a new fad brought on by the sudden availability of the technology that supports it. It will likely go the way of the pet rock and beta max. Take a deep breath and ride it out, unless it begins to take over the life of the subject. Otherwise, it's really nothing to stress about. 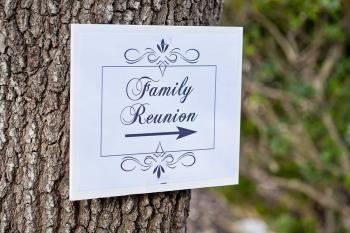 5 Fun Games For a Family Reunion