Teaching daughters to value themselves, and demand the same from boys

When my daughters began dating a new guy, I would always ask them, "Would he be willing to work for 14 years for your father for nothing but your hand in marriage?"ť This usually elicited uncomfortable giggles.

When my daughters began dating a new guy, I would always ask them, "Would he be willing to work for 14 years for your father for nothing but your hand in marriage?"ť This usually elicited uncomfortable giggles. "If not, he is not worthy of you,"ť I would remind them.

You don't have to believe in the Bible to love the story of Rachel. It is a wonderful story to relate to daughters. I always taught my daughters to think of themselves as Rachels.

It was a different culture then, so obviously we wouldn't want every part of the story to come to pass. But the message for our daughters is that this man worked forÂ 14 years for nothing except the privilege of marrying Rachel.

The truth is, getting your daughters into the mindset that they are of such worth that they needn't settle for any old scrub begins much earlier. They must be taught that they are precious, self-reliant, smart, talented, and good. They must be taught that there is so much more to them than the physical components that make them up—beautiful face, breasts, long legs, and small waist—whatever they happen to have that attracts boys to them. If they believe that they have the ability to take care of themselves and to make good decisions on their own, they will be less likely to run into the open arms of the first young man who grabs their attention.

We would do well to limit the messages that come in droves from media that reinforce the notion that women are objects of desire. We are hit with a barrage of images that most of us cannot live up to, though some of us are dying trying. There is more to women than the bodies plastered on billboards or shown writhing in beds. When you can't avoid these messages, at least let your daughters know you don't agree with their portrayal of women.

2. Praise your daughters for their own unique character strengths

3. Make sure fathers know their influence matters, too

Mothers aren't the only ones responsible for guiding their daughters. Whether a father is in the home or living separately, he can inspire his daughters to value themselves just by being good to their mother. As Howard W. Hunter said, "Indeed, one of the greatest things a father can do for his children is to love their mother."ť

Fathers, to raise a daughter that demands respect from boys, show that respect to your wife.

Mothers, expect and accept that respect from your husband. 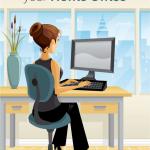 How to Organize Your Home Office