Teaching Honesty to Your Children

By Teaching Honesty to Your Children You Are Laying a Foundation For a Peaceful and Productive Life. People Enjoy Being Around People They Can Believe and Trust. Help Your Children Along This Path of Integrity.

A person can learn a lot at a funeral, even about how to teach honesty to your children. At the funeral of a nearly 90-year-old woman, her children took turns telling about what a great mother she had been and why. Her only son, Bob, shared the following story.

Bob was about 12 when this happened. His science project was due and he wasn't finished. He had worked hard on it and it was now the morning of the due date, but he knew he would get a failing grade if it wasn't finished. He decided to stay home from school and finish it and turn it in the next day. His mother allowed him to do so.

The next morning, with completed project in hand, he asked his mother to write him a note saying that he had been sick and couldn't come the day before. She said, "I will not write a note saying something that is not true. You made the decision to do this, now you must tell your teacher the truth." He was devastated, as he went off to school. During his science class the teacher announced that 14 students had brought their projects in late with a note that they had been sick the day before. Then he looked at Bob and said, "Please come with me."

Scared about what was about to happen, he followed the teacher into a private room. His teacher asked him to sit down, and then began by saying, "Fourteen kids brought notes that they were sick yesterday and all turned their project in. You came with no note and turned yours in. What happened to you yesterday?"

Bob said, "I wasn't sick. But I needed one more day to finish my project so I stayed home to do it." His teacher said, "I want to congratulate you for being honest. Thank you." He got a good grade and pat on the back from his teacher.

Here's the best part, Bob said, "I didn't deserve the praise that day, my mother did. Because of her I was honest in my report to the teacher. And I never forgot that lesson."

We know Bob well. He became a man of integrity, married a good woman, and together they have raised an honorable family. The foundation of honesty that we give our children will be with them throughout their lives. As Bob told this story we watched the eyes of the children, grandchildren and great-grandchildren riveted on him. What a legacy this good woman has left her posterity.

Three things you can do

1. Teach your children the meaning of the word honest

. Some dictionary definitions include refraining from lying, cheating, or stealing. So, in essence, a person who is honest does not tell lies or cheat people and obeys the law. It may be helpful to have your child look up the word honesty and report to the family what it means.

2. Give your children examples of people you know who have been honest

Tell them about the time when someone you know was given too much money in change and how he returned it to the rightful owner. Or some other story that shows simple honesty in action. Find heroes in history who displayed honesty as one of their prime characteristics. Remember, Abraham Lincoln was referred to as "Honest Abe." Do a little research and tell your children why he had that reputation.

Tell your kids about a time you may have been tempted to tell a lie but instead had the courage to tell the truth. Help them learn from your example. Let them see you being honest in all your dealings. They are watching you and will follow in your footsteps. Make sure those footsteps lead them to truth.

Help your children know that being honest brings peace and blessings throughout life. If you are honest, people can trust you and good things follow those who can be trusted. Albert Einstein said, "Whoever is careless with the truth in small matters cannot be trusted with important matters." We must teach our children to be true to themselves and true to others in word and actions. 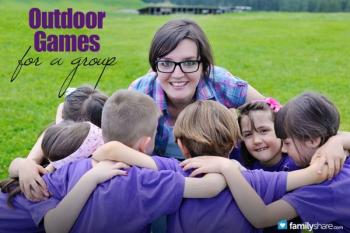 Outdoor Games For a Group