This Will Change the Way You View Tantrums.

It changed me; it changed the way I think as a mother.

It went something like this: When adults have a bad day, we come home, kick our feet up and watch Netflix with our favorite snack to make ourselves feel better. The last thing we want is someone yelling at us.

It was a simple, yet profound comment for me. It made so much sense.

I'm not saying to use Netflix to cure your toddlers' fits. The point is, when we're having a tough time, there's a reason for it; and someone yelling at us only makes things (much) worse.

And as adults, we usually know why we are feeling a certain way.

And, for the most part, we realize that throwing a tantrum on the floor isn't the best way to unwind and deal with the situation.

But toddlers don't know. They haven't learned how to properly understand and deal with their emotions. So they cry, scream and throw tantrums. And to be honest, kicking and screaming on the floor sounds like a good way of dealing with adulting sometimes. So cut them some slack.

What they need is comfort and understanding — not someone screaming back at them.

According to kidshealth.org, "Tantrums are a normal part of child development. They are the way young children show they're upset or frustrated."

So instead of getting angry and losing it, remember that whatever is bothering them is a real issue to them. And though it may seem irrational to you, it doesn't to them.

And it shouldn't have to, yet. They're little. They're learning.

Instead of yelling, offer them a hug. Ask them to come talk to you about why they're upset; tell them you understand, and then help them walk through their emotions.

Instead of sending them straight to their room, let them know you're there for them; allow them to sit by you and cry if they need to.

Help them know it's OK to be upset, to cry and to feel like everything is falling apart; because those feelings don't just disappear as they get older.

Be on their side. There will be enough people in this world who aren't.

Kelsi graduated with a journalism degree and is passionate about the written word and the power it has to bring more good into the world.
nextarticle 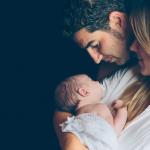 Here's How Much Time Dads Spend Parenting Vs.…