The FDA says it’s OK to give your baby peanut butter; here’s why

Researchers have known for years that exposing babies to peanut products may help prevent allergies. Now the Food and Drug Administration has given its approval. Should you spread a little peanut butter on that zwieback?

Fewer than 2 percent of children in the U.S. are known to be allergic to peanuts, but those who are can die within minutes of eating a morsel of something containing peanuts, even if they don't swallow and even if they spit it out.

With peanut allergies on the rise and many schools banning peanut products, some parents might be tempted to withhold all peanut products from the house just to be safe. But a growing body of research suggests that's precisely the wrong thing to do. And earlier this month, the Food and Drug Administration officially agreed.

The FDA announced Sept. 7 that it will allow manufacturers to say on food labels that babies who are introduced to food containing ground peanuts early in life are less likely to develop peanut allergies. The advice comes eight months after the National Institutes of Health issued new guidelines that encouraged parents to expose children to ground peanuts as early as 4 months of age.

The guidance was a reversal of advice issued 17 years ago by the American Academy of Pediatrics. Then, the AAP said that high-risk infants - those who have severe eczema or are known to be allergic to eggs - should not be exposed to peanuts before age 3. Since then, studies have found no benefit in waiting to introduce children to peanuts and, conversely, have found a protective effect.

But before parents start slathering peanut butter on the teething crackers, they should know exactly what the guidelines say. Most importantly, never feed a baby whole peanuts; children should not have whole peanuts or tree nuts until at least age 4 because they are a choking hazard.

What the guidelines say

Although babies should breast-feed or have formula until at least age 1, most parents begin to introduce solid foods to their children anywhere from 4 to 6 months. In America and some other countries, a baby's first food is usually a cereal or porridge made with rice, followed by mashed fruits and vegetables.

A baby is ready to start solid foods if she can hold her head up, move food from a spoon into her throat, open her mouth when food comes her way and has doubled her birth weight, the AAP says.

At this time, parents can freely give peanut butter or other products containing ground peanuts to children at no risk of an allergy.

For infants at risk, the process is a little more involved.

Babies who appear allergic to eggs and who have severe eczema should be tested for a peanut allergy before peanuts are introduced. Depending on the test results, they can be cleared to begin eating food containing ground peanuts, either at home or in the presence of a physician.

Parents of babies who aren't allergic to eggs, but who have mild to moderate eczema, should also proceed cautiously. They should be given ground peanuts at about 6 months of age, after they have been introduced to other solid foods. A physician's evaluation is not needed unless a reaction occurs.

The guidelines were based on the results of a 2015 study in which 640 infants with severe eczema and/or egg allergies either avoided or consumed peanut products until they were 5 years old. (No children already identified with peanut allergies were included in the study.)

In the study on which the new guidelines are based, children ate, on average, 4 heaping teaspoons of peanut butter each week, according to an NPR report.

Instead, dilute the peanut butter by adding hot water.

Dr. Ruchi S. Gupta, a pediatrician and immunologist at Northwestern University, told NPR you should add water to 2 tablespoons of peanut butter and stir it to make a puree.

Once it's warm, not hot, put some on a spoon and offer a taste to your child. Then watch the baby closely for 10 minutes, looking out for any potential side effect, such as hives, a rash, behavior changes or trouble breathing. If there is no change, you can feed the baby more, but continue to monitor the child for side effects for another two hours, Gupta said in a video produced by the American College of Allergy, Asthma and Immunology in San Francisco.

It's important to remember that peanut butter shouldn't be the first solid food your child eats but should only be introduced after your child has eaten other solid foods.

When giving babies peanut products, however, parents should stay away from the iconic food of childhood, the PB&J.

Pediatricians may have changed their minds about peanut butter, but sugar remains a nutritional villain, so much so that the American Academy of Pediatrics no longer recommends fruit juice. 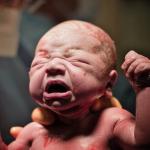 How Many C-Sections Can a Woman's Body Really…