Garrett Bolles used faith to get to the NFL.

Garett Bolles is an American football offensive tackle for the Denver Broncos. He played college football at the University of Utah and was drafted by the Broncos in the first round of the NFL Draft in 2017.

Bolles was born in Walnut Creek, California, on May 27, 1992. His family moved to Lehi, Utah, where he battled a troubled life as he sought out and found trouble with drugs, alcoholism, violence, and gangs. Bolles says he fought a lot because other kids would make fun of him. He would hold in his anger until he exploded. In August 2010, Bolles got arrested for vandalism while pulling a school prank after he and some other players vandalized rival Lehi High School’s football field. He was falling behind in school, fighting with his siblings, and now he had a criminal record.

However, Bolles’ bishop could see that he was struggling, so he decided to enlist the help of Emily Freeman. Freeman recruited other women who helped mentor and tutor Bolles. He recalled, “They knew I would get in trouble on the weekends and at night, so they were protecting me. But they were also like my family. Whatever it was, clothes, shoes, they were always there for me to take care of me.” Bolles had these women’s support until he graduated from high school, but he would still find himself in trouble.

The summer after graduation, Bolles was headed down the wrong path, and everyone around him saw it. He would listen to gospel messages and those around him, but he would still let his anger get the best of him. Bolles also found himself dabbling in drugs and alcohol. At the end of his rope, Bolles’ father, Grove, kicked him out of the family home until he got his life together after finding Bolles at home with friends who weren’t supposed to be there. Grove gave his son four hours to gather his belongings, or he would have him arrested for trespassing. Bolles sat on the curb and cried with all his belongings around him, unsure of where he would stay or what would happen next.

Luckily, an angel named Greg Freeman saved the day. Freeman saw Bolles crying on the side of the road and decided to pull over and change his life forever. Freeman helped the young man get his stuff into his car and drove off. He called his wife Emily and explained the situation on the way home. When Emily hung up the phone, the first thing she did was pray, and the Lord said, “Bring him home.”

When Bolles arrived at his new home, Emily had him leave all of his things in the car until he agreed to four rules: (1) go to Church, (2) pay his tithing, (3) turn in his phone at night, and (4) don’t talk to his old friends. The Freemans didn’t expect Bolles to last long, but he proved them wrong.

Garrett’s Journey to The Lord.

At this point, Bolles didn’t know what he wanted to do with his life, and nothing seemed to stick, from a trade school to joining the Peace Corps. Still, Bolles knew for sure that he didn’t want to go on an LDS mission. Unsure of where to turn, Bolles visited his bishop, who suggested he go on a mission. While recalling that moment, Bolles said, “I was like, ‘Bishop, listen, you’re crazy. I’m never going to serve a mission. [Then] the Spirit just hit me, and I started to cry. I looked up to my left and, I’ll always remember this, there was [a painting of] Christ in the Garden of Gethsemane lying on the rock and going through the Atonement process, and I just started to cry.” It was that moment where Bolles knew he would serve on a mission.

While serving his mission in Colorado Springs, Colorado, Bolles kept working hard and shared his testimony with others, connecting with a 14-year-old who he says was just like him. Within months, Garett baptized John and then watched him grow. Bolles said,  “I got to give him the priesthood. I got to give him everything that I could. And it’s just so amazing to me that the Lord calls you to an area where you can bless people.” However, ten months into his mission, Bolles started struggling. After a meeting with his mission president, the two decided it would be best to return home to work through some things. The adjustment was rough, but Bolles did what he had learned to do best, turn to the Lord.

Bolles intended to move forward and was prepared to serve the Lord in whatever place Heavenly Father wanted him to be, whether that was returning to Colorado, completing a service mission, or finding a new direction in life. After returning from the mission, a stranger randomly told Bolles that he should look into playing football. Graduating with only a 2.2 GPA in high school, Bolles wasn’t NCAA-eligible, so Division I football wasn’t in the cards. With so many others saying it wasn’t possible, Bolles decided to visit Brigham Young University to talk to Coach Steve Kaufusi.

Coach Kaufusi called Snow College, and soon Garett was headed down for a two-week trial with the team. Snow College only had one football scholarship left, and Garett had to earn it, which he did. However, making the team was just the start. Bolles needed to improve his grades to become eligible for Division I football. Bolles dedicated himself, spending every night from 7 p.m. to 11 p.m. in the library after football practice, working with tutors and studying. By the end of the year, Garett had earned a 3.5 GPA and became the most highly recruited junior college player in the United States.

While at Snow College, Bolles met Natalie, who was a cheerleader. The two met at a school dance, exchanging numbers and talking more over the weekend. Natalie was curious about Bolles, so she Googled him. Unfortunately, the first thing that popped up was his mug shot. Feeling apprehensive, Natalie asked Bolles about his life. He asked her if she wanted the whole story, to which she replied yes. At that point, Bolles explained his entire life story to Natalie, the good, the bad, and the ugly. At the end of it, Natalie cried. The two got to know each other better over the next few months, then engaged.

She wasn’t quite ready to go through the temple, according to Natalie. However, the couple kept the temple as their goal to celebrate their wedding day. When Bolles left Snow College, he wanted to find a football program that encouraged players to live their faith, which is why he committed to the University of Utah. Bolles knew he had found the right fit with coaches who cared about him and college religion teachers and Church leaders offering prayers and inspirational messages before games.

Then, The Bolles welcomed their son, Kingston, to the family. In January 2017, Garett and Natalie were sealed in the Payson Utah Temple. “That was another dream come true, and it was awesome because we had our son there with us,” Bolles says. “He is the best thing that has ever happened to me.” “He was smiling the whole time, and I just started to cry, [knowing] this is my forever family,” Natalie added.

A few months after they were sealed, the Bolles family found themselves in Philadelphia, Pennsylvania, sitting through one of the tensest nights of their lives. That year, after agonizing over the decision to stay in school or declare for the draft, Bolles finally received his answer in the temple: “Act in faith.” After declaring for the draft, Bolles was one of only 22 potential recruits invited to attend a special draft event. However, right before the Bolles family flew to Philly, they got terrible news. Unfortunately, rumors were swirling about Bolles having ADHD. Bolles had trouble with reading when he was younger, and thought his ADHD would hurt his chances of landing a first-round pick. Now, the family was unsure if they wanted to go. After praying about it, Bolles decided to go anyway, and Emily Freeman prayed that “God would be present,” no matter what happened. When he got to his hotel, Bolles found immediate reassurance when he looked up and saw the Philadelphia temple directly across the street.

While at the draft, the Bolles and Freemans were rattled with nerves. Picks kept going by without Bolles getting a call. The first 10 picks went by, and Garett grew anxious. Then picks 13, 14, 15, but still nothing. At pick number 17, Bolles bowed his head and began praying, determined to turn his worry over to the Lord. At pick 20, the phone started to ring. Natalie yelled, “Answer the phone! It’s Denver. Answer the phone.” Bolles could hardly move because he had broken down into tears. When Bolles first declared for the draft, it was predicted that he would be in the top 10 draft picks. Unfortunately, when the news broke about his learning disability and his future was up in the air, Bolles wondered why God would allow his to happen.

However, when Bolles answered the phone and talked to the coach of the Denver Broncos, everything made sense. Bolles would go back to where he served his mission with a team that focused on faith and family. He knew the Lord put this moment together, and Bolles knew it was meant to be. He said, “We thought that we were going to go to other places, but the Lord knows where you are supposed to go at all times, and if you take care of the small, simple things, and if you put Him first in everything that you do, [then] football is going to take care of itself.”

Now settled in their new home in Denver, the Bolles family have found ways to keep the gospel an active part of their daily lives. “Garett has Tuesdays off, and we’re going to try to make that our temple day,” Natalie says. “We read scriptures together every night no matter where he is, and we pray together before bed.” Bolles is still close to his father and siblings and those who helped him along the way. He calls his wife, dad, and Emily to remember where he came from and all he stands for.

“Just because [Garett] went to the bishop that one day and decided he was going on a mission, it doesn’t mean his life has all worked out since that day,” Emily says. “But God has been a part of his life since that day. Garett’s such a great example that God doesn’t want just perfect people. He will meet anybody where they are exactly as they are, but He doesn’t intend to leave them there. Garett’s has been a journey of just becoming better every single day.”

Looking back over his journey from a homeless teen to an NFL player, Bolles knows he couldn’t be the man he is without God in his life. Bolles said, “I use [the Atonement] daily. I’m not perfect, nor do I want to be perfect, but I strive to be more perfect.” Bolles says that whatever your issue is, it’s okay to struggle, but it’s what you’re going do with that struggle and what you’re going to do afterward that counts. 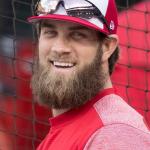