You can't keep your child from making mistakes, but there's a lot you can do to help her avoid them.

However, parents sometimes fail to teach children about the sanctity of their bodies and the need to protect those bodies from the enticing lure of immodest fashions. Our daughters are often persuaded to follow trends that are too revealing. If we expect our children to want to protect and respect their bodies, it must start early. If we allow immodest clothing (even cute little outfits worn when our daughters are still very young) and then expect our children to suddenly choose to dress modestly when their bodies begin to develop, it'll be too late. Children need to grow up wearing modest clothes from the earliest ages.

My husband and I were impressed by a recent article from a concerned mother, titled "Why I don't let my 4-year-old daughter wear spaghetti straps." In the article, Melanie, an educator and mother, explained why she believes it's important to teach her 4-year-old daughter to dress modestly at a young age. She tells about her daughter receiving a doll for Christmas - with a matching outfit for her daughter. Part of the outfit was a tank top with spaghetti straps, including a little sweater to cover the shoulders.

Before long, the daughter was walking around without the sweater top, wearing only the spaghetti strap top. Melanie said, "Now, I'll admit, when my 4-year-old attempts to wear the new spaghetti strap tank top, she doesn't look immodest. She still manages to look innocent and dignified. So, why won't I allow my daughter to begin wearing these types of tops at age 4? Because the battle she and I will inevitably have over tank tops will be a lot easier to win if the standard never changes. The same rings true for two-piece bathing suits and other clothes that will not protect her dignity and mystery when she is at a more womanly stage in her life."

And we can't just tell our kids "no." We need to explain the why. Our children will be much more cooperative if we do that. Melanie understood the importance of that concept. She said, "I sat her down and said, 'Ella, we do not wear spaghetti strap tank tops without a sweater over them because we are so beautiful and they do not protect our incredible mystery. Mom does not wear them without something over them, and it's not something you will be allowed to do, now or when you are older.'" She said her little girl seemed to understand and followed her instructions without any tears or fight. She got it.

Parents need to be firm in their resolve to protect their daughters. One woman told of her experience when she was 16 years old and had a date for the prom. The popular fashion of the day was strapless evening gowns. She had been taught about modesty her whole life, yet when the time came for prom and she went shopping with her mother for a prom dress, the popular fashions were very tempting. Even though she knew better, she wanted to be "in" and wear what everyone else would be wearing - a strapless dress.

As the two shopped, they couldn't find anything modest in any of the shops. Finally, the girl convinced her mother to buy a strapless gown that was the perfect color for her. The mother agreed - as long a homemade top would be worn with it. Somewhat disappointed, the girl agreed. The two went home with the dress and the material. Then, something unexpected happened. Before the mother had a chance to make the covering, she was called out of town to help with her son's newborn baby - her first grandchild. She forgot all about making the cover that would make the dress modest.

The night of the prom arrived. The girl was excited about wearing her new strapless gown. When she came out of her bedroom, 10 minutes before her date was to arrive, her father was shocked. "Where did you get that dress?" he asked. "Mother bought it for me." The man knew his wife well and said, "Mother would never buy this without a plan. Now you tell me the plan." The next 10 minutes were filled with the girl's father taking the material, cutting it into one long, very wide strip and sewing it to the top of her dress on one side, draping it across her shoulders, and sewing the other end carefully into place on the other side of the dress.

She was mortified. Her father didn't preach to her during this process. He knew his daughter knew all about the modesty standard in their family. Words were not needed. Just action. When the father was done, he stood back and said, "You look beautiful!" She doubted it and ran into the bedroom to have a look in the mirror. To her surprise, the stitches didn't show and the dress looked like it came that way. She remembers feeling very loved and safe that night.

That's what we need to do for our children. Set a dress standard, then make it happen in loving and caring ways.

_Together, Gary and Joy Lundberg author books on relationships. See their e-book, "Wake-Up Call - What Every Wife Needs to Know." 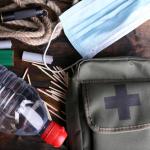 The Easy-to-Build Kit For the Worst of Times:…