In More Ways Than One, the Love Between New Dad and Baby Boy is Exactly This.

Pentatonix has singlehandedly changed the public view of a capella since their win on season three of "The Sing Off." Their most recent album includes the original song "Can't Sleep Love," which, if you haven't heard, you need to. It's a shout out to the kind of love that you "dream about all day, the kind that keeps [you] up all night." I'm sure they intended the message to be classic romantic love, but it said something different to me.

Lucas entered the world at 4:30 p.m. on Wednesday, October 7th, 2015. Eight pounds, 12 ounces, 21 inches long and every bit my son. Somewhere between treading water in a new job and changing diapers hand over fist, I've searched for and occasionally found a quiet spec of time to contemplate what on earth happened and how it came so abruptly.

When I made it around the hospital bed to see his face for the first time I was stopped dead in awe, for lack of a better word. I didn't dare touch him for the longest time. The transition to overwhelming, unconditional, encompassing love set in like I was always capable of it.

I saw so much of myself in him that first day in the hospital and I see more every day. At the same time I see equal parts of his mother in his little face. A miracle is the only way to describe the subtle hints of each of us that contributed to who he is.

Before I get too high-headed about this, I wantto tell you that our family life is gloriously perfect and we've had nothing but rainbows and butterflies and the heavens opening over at the Rudd home, but I can't.

The magic is fading and work, school and sleepless nights have crept in. I'm still selfish, stressed, reluctant, impatient. I love sleep and haven't quite squared with letting go of my old life.

Needless to say, I was not the best father figure the first night Lucas was still eye-popping awake at 3 a.m. I handed him to my wife, who was every bit as wiped out as I was, and threw myself onto the bed while she fed him. He still wasn't sleeping when she was done; she handed him back. Summoning the courage to not lose my mind over lost sleep, I took him again and tried to rock him against my chest; no good. In a last ditch effort I got back in bed, Lucas still on my chest, and rubbed his tiny back. He was asleep in less than a minute.

Instantly my irritation over lost sleep evaporated. He fell asleep on my chest. I almost had whiplash from the mood swing; the guilt of ever having been mad on the one hand and the greatest happiness of having a son on the other. I was being hugged and slapped at the same time.

While I stared at the ceiling, baby asleep on my chest, a thought came back to mind I had often chewed on waiting for him to arrive. When we found out we were expecting, my first thought was blinding, cataclismic fear. Sometimes the fear came with the arrogant selfishness of "Why do I need to completely give up my life for this kid? I love the married couple life and I hate the thought of losing it."

The unfailing response to that was the thought of my own parents. They had already given up the easy life for me. They already made the decision to have children over personal comforts or a heathy savings account. If they who were so selfless and full of love for me could do that, and willingly, how did I even have the right to deny to another what had been so freely and fully given me?

Returning to the moment made me almost reverent, looking into Lucas' sleeping face. What if he had never happened? What if I never married his mother? What if we said no to childen and he was delayed another five years or, God forbid, aborted? The thought felt like salt on broken skin.

Lucas has grown too much in the last three months; he wiggles constantly and smiles at his mom and dad all the time. He falls asleep like a wet bag of cement and eats like a horse. But the changes in his little life are minuscule compared to what he's done to his dad. He's getting bigger; but I'm getting better.

I think about him all the time during the day and he's literally kept me up all night. Even if it costs sleep and maybe a little sanity, it's the only kind of love really worth having. Having children is the real"Can't Sleep Love" — heart-wrenching, life-changing, all-absorbing love. I'm sure he'll be keeping me up tonight, and I almost look forward to it.

_This article was originally published on Open Mic Night in My Head. It has been republished here with permission._ 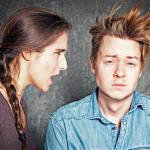 Why Your Marriage Problems May Not Be Your…