The strange creatures we call children

Children do and say some mighty strange things. Our job is to love them in spite of their shenanigans.

As a parent of so many kids from so many walks of life, I am a huge fan of the comic strip Zits, by Jerry Scott and Jim Borgman. One particular strip featured the 15-year-old boy, Jeremy Duncan, in a variety of perplexing situations, leaving his mother completely flummoxed at the end of the day. Things like taking pictures of his underarm hair, tattooing hair onto his chest with permanent marker and sunbathing on the roof in his boxers.

I completely identify with that mom. I have had kids say and do some of the most peculiar things - not only my biological children, but any of the more than 50 foster sons and daughters I've helped raise - things that left me teetering on the edge of my sanity and questioning why I didn't remain single and raise cats.

Among the really funny and strange things I've seen and heard:

I have to stop now and maybe find some anxiety medication. In all seriousness, children do and say strange things. They are amazing creatures and I wouldn't have traded one moment I spent mothering them. After reading this, I think you should go and give your kids a real big hug and thank them for being "normal" whatever that is. 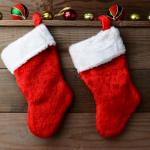 Tips For Being a Smart Santa Helper