They Can't Talk Yet, But There's a Lot Going on in Their Little Minds.

You pick up your baby and look into their sweet eyes as you admire their tiny toes and chubby cheeks. You can't believe it's already been six months. Your child is so new to this world, yet they are growing so quickly - physically and cognitively. While they can't tell you this with words, this is what is going on in your six-month-old's mind:

Your baby starts to notice they are independent from you at about seven months, so shortly before that, they start to fear separation. Until now, your baby thought that they and their caregiver were one, according to Baby Center. They had no reason to fear separation, but now that they are realizing their own identity, they worry when mommy leaves the room.

To help your child in this phase, comfort them when you come back. They'll start to understand that when you leave, you will always return. Building that secure base means your baby will realize that their caregiver is there when they need comfort, according to John Bowlby (a psychologist known for his work on child development and attachment theory).

The reason your six-month-old is worried when you leave the room is because they now understand that things still exist even when they can't see them - this object permanence develops around the four month mark.

This principle also why peek-a-boo is so popular among babies - before this realization, they literally thought that you disappeared and reappeared before their eyes!

Your baby is in the sensorimotor stage during their first two years, a time full of cognitive development. They're experimenting with what their body can do, and love doing things they like over and over.

This secondary circular reaction stage is why your child shakes a rattle so much. They like the noise, so they keep shaking. Your baby is learning that their actions have an effect on the world around them, and helps prepare them for the next state: using this knowledge to get what they want.

Gravity is a wonderful thing.

Those repetitive actions help your baby learn about cause and effect, usually around five months. They learn this by doing random actions and noticing the effect it has on their environment: When they press a button on a toy, it plays a song. When they cry, mommy or daddy comes running.

Your baby will start to experiment with cause and effect (lucky you). When they drop a toy from their high chair, you pick it up. Then they drop it again, watching how you respond. This game might be a little annoying, but it helps your child to learn how their actions influence their environment.

5. Babies root for the hero

Many six-year-olds are superhero fans and it turns out that your six-month-old is, too! Before your child can even talk, they can understand one crucial concept: it's important to help others.

After both videos, the babies were allowed to pick between the squares (the involved vs. uninvolved bystander). "The babies overwhelmingly went for the hero," researchers said.

Remember, no two babies are the same, so they aren't all going to meet milestones at the same time. But by providing situations where they can learn about and reach certain milestones, you'll help your baby figure out this world around them. 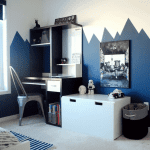 4 Ways to Update Your Child's Room as…