So if You're in a Relationship, You Probably Find Single People Less Attractive. Here's Why.

Beauty may really be in the eye of the beholder.

A new study published by the Society for Personality and Social Psychology found that couples tend to downgrade the attractiveness of other peoplewho they perceive as potentially threatening to their relationship. That is to say, couples find everyone else less attractive.

The researchers said this may be the brain's way of exhibiting self-control that helps us overcome any temptations of leaving the relationship. Our brains, they said, may be hardwired for long-term relationships, especially when we're happy.

"Misperceiving attractive people who represent threats to the relationship as less attractive may help people resist the inclination to pursue them," Dr. Shana Cole, one of the study's researchers, said in a statement. "This is especially important since finding someone physically attractive is a primary reason why people choose to date or romantically pursue someone."

To find this, researchers had 131 heterosexual couples match a photo of an opposite-sex lab partner with one of many images, all of which were manipulated to either look more or less attractive than the original photo.

What's more telling about this study is that the downgrade occurred even though participants were told they'd be entered into a $50 raffle if they correctly matched the individual with the right images.

"In today's world, it can be difficult to stick it out with one long-term partner," study co-author Emily Balcetis said in a statement. "This work suggests that there are processes that may take place outside of conscious awareness to make it easier to stay committed to one's own partner."

Of course, this study may not be ready to apply to the real world. Cole said the study didn't make it clear whether one's perception of attraction affected interaction, meaning just because someone isn't viewed as attractive doesn't mean one can't be interested in them.

This isn't the first body of research to indicate that beauty is relative. As Lois Collins reported for Deseret News National last year, a study from Harvard University found that people indeed have a type, and that attraction is based on one's own experiences.

To measure this, the researchers gave 35,000 an online survey that had them rate faces based on attractiveness through Test My Brain, a web platform with quizzes and brain tests. They found people mostly disagreed on what they found attractive. They also found that people tend to shape their perceptions of attraction based on their own environments and experiences, according to Science Daily.

"This is in striking contrast to individual differences in face identity recognition, which result primarily from variations in genes. The large impact of experience on individual face preferences provides a novel window into the evolution and architecture of the social brain, while lending new empirical support to the long-standing claim that environments shape individual notions of what is attractive," the researchers wrote.

To check their findings, the researchers conducted a second study in which 547 identical twins and 214 pairs of fraternal twins chose which faces they found attractive. The researchers found that home environments, similar upbringings and genetics had no effect on perception of attractiveness.

But this isn't true for all people. As the researchers noted, there are some people who are generally perceived as attractive, no matter our experiences.

"Of course, some aspects of attractiveness are pretty universal and may even be coded into our genes," the researchers said, according to Science Daily. "For example, people tend to prefer faces that are symmetric. Beyond such limited shared preferences, however, people really do have different 'types.'"

And, according to The Telegraph, there are some other qualities that are generally perceived as attractive, like symmetry, finger length (a study said women often find that longer ring fingers indicate more testosterone and attractiveness) and blonde hair are all believed to be more attractive qualities. Body shape, smell and social skills also contribute to one's attractiveness. Some also believe that having more money makes you more attractive.

Previous research has also indicated that long-distance runners are seen as more attractive because of their high levels of testosterone, which makes them more fertile (yes, this study is real).

No matter what you find attractive, it's still important to make sure your spouse feels beautiful. Here are thetop 10 quotes about beauty from BrainyQuote that you can recite to your spouse to remind them of how beautiful they are.

_"The beauty of a woman must be seen from in her eyes, because that is the doorway to her heart, the place where love resides." - Audrey Hepburn_

_"Think of all the beauty still left around you and be happy." - Anne Frank_

_"Everything has beauty, but not everyone sees it." - Confucius_

_"A woman whose smile is open and whose expression is glad has a kind of beauty no matter what she wears." - Anne Roiphe_

_"Life is full of beauty. Notice it. Notice the bumble bee, the small child, and the smiling faces. Smell the rain, and feel the wind. Live your life to the fullest potential, and fight for your dreams." - Ashley Smith_

_"Never lose an opportunity of seeing anything beautiful, for beauty is God's handwriting." - Ralph Waldo Emerson_

_"We live in a wonderful world that is full of beauty, charm and adventure. There is no end to the adventures that we can have if only we seek them with our eyes open." - Jawaharlal Nehru_

_"The best part of beauty is that which no picture can express." - Francis_ 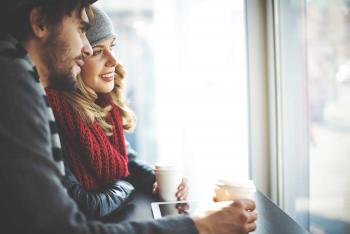 How to Know if He Wants Out of…