Tips on Talking to Your Babies and Toddlers

Talking With Your Babies Gives Them a Huge Head Start in Developing Language, Social Skills and a Loving Bond Between You and Your Child.

Talking to your children seems like a simple, even automatic, thing all parents do. But are you really talking to them, or do you simply give out commands and move on? Having real conversations with your children is important in developing their language and social skills.

It begins early. A recent Standford University study determined, "Future academic success is developing before the child ever steps foot into the classroom." The study showed, "Language begins from birth, as does the influence parents have on their child's language comprehension."

Talking directly to your child right from the beginning is vitally important in developing these language skills. What the child hears in the background, such as TV or phone conversations, doesn't really have much effect. It's being looked at and talked to directly that makes the difference. That's when a child becomes engaged in the learning process.

"Even though you don't see a child understanding anything," Stanford researcher Anne Frenald reported, "they are absorbing information about their language that is really important for later development. That little brain is very busy wiring up circuits for language that will build a foundation for language."

When to talk to your little ones

1. When you're changing a diaper

Don't let this be a silent maneuver. Engage in animated conversation with your baby. Smile and say things like, "You are the cutest little baby I ever saw." Then start talking about what's so cute about him or her. Describe what you are doing while you're doing it. "I'm changing your diaper so you can be all clean and comfortable."

When you're talking have as much eye-to-eye contact as you can. Your child can watch your lips and see how words are formed. Encourage him to mimic you as soon as he is ready to try. We all do that already in our efforts to teach them to say "mama" and "daddy." Most kids pick up quickly on the word daddy by saying "dada." That's how it all starts.

Our first child's first words were "Wherezit?" He heard us say "Where's it?" so many times as we looked for his pacifier that it was second nature for him to say it as of if it were one word. Babies and toddlers say what they hear, so watch what you say and enjoy their cute way of talking. Don't worry about pronunciation. Just have fun talking with your child and letting the babble flow. Real words will find their way into his vocabulary as he keeps hearing you talk.

2. During your child's mealtime

It begins with nursing time - whether by bottle or breast. Look your baby in the eyes at least part of the time and say something like, "Mommy loves you so much! I like to feed you so you can be strong and healthy." When the child is older keep the conversation going. Talk about what's on her plate. When it's one-on-one in the high chair, have fun talking while you're helping her scoop up the food. Say something like, "These are yummy carrots. Bunnies really love carrots. They make you strong." Good conversation shows you care and encourages your child to eat well.

3. Read to your child right from the beginning

But, don't just read, talk about what you're reading. Have your child point out certain objects in the pictures. This helps him develop not only reading but language skills, too. The more you engage him in the story with your animated interpretations and explanations, the more he'll learn.

4. Display the alphabet around your child's room

Years ago, when our fifth child came along we painted a mural on his wall of a monkey playing with alphabet blocks, all stacked in order. It provided a fun way to point out the letters and let him sound them out and become familiar with them. And it was a cute decoration for his room. He could see it from his little bed and have fun saying the alphabet over and over. It became a fun game for him. That's when we taught him the ABCs song. Here's a fun video of the ABCs song.

5. As you go for walks with your child point out items of interest

and tell him or her what they are. A sweet memory of one young father was the day he introduced his toddler to a tree. He took his little son over to a tree and touched it. He had his son touch it and said, "This is a tree. Can you say 'tree'?" Kids love and learn from this kind of parental interaction.

The main thing is to have fun talking with your children about the wonderful world they live in. It not only stimulates their learning and language ability, but it creates a loving bond and feeling of security with their parents. 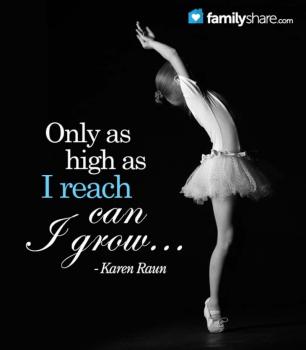