Former President Jimmy Carter Opening Up About Cancer Spreading to His Brain Made Headlines in August, But Now, He's Cancer Free, He Told His Plains, Georgia, Congregation Sunday School Class He Was Teaching, According to Npr.

In the same Plains, Georgia, church where he taught a gospel lesson in August just days after announcing cancer had spread to his brain, former President Jimmy Carter gave brighter news to the congregation on Sunday.

"So a lot of people prayed for me," Carter told the class, according to the Post. "And I appreciate that."

Since Carter's admission that doctors found melanoma spots on his brain earlier this year, people have traveled from across the country to watch him teach Sunday School, an activity he continued despite health issues, the Post reported.

In August, I reported for Deseret News National on Carter giving his 689th talk the same week his battle with cancer came to the fore.

Then, more than 700 people packed the sanctuary and overflow room of Maranatha Baptist to hear the former president speak on the theme "Love Your Neighbor."

"You have heard it was said that you will love your neighbor and hate your enemy, but I say to you, love your enemies and pray for those who persecute you," Carter read from the Gospel of Matthew, Grant Blankenship wrote for Georgia Public Broadcasting.

Ashley Southall wrote for The New York Times that Carter has been receiving treatment over the last four months involving radiation therapy and pembrolizumab.

Carter continued teaching Sunday School and helping build homes for Habitat for Humanity in the midst of that, Eyder Peralta wrote for NPR. By November, his condition exceeded expectations.

"I'm feeling better than anybody expected me to, so I'm still maintaining a pretty normal schedule, I'd say," Carter told NPR last month.

So what's in store now for Carter after the good news?

He'll need to continue treatment because a patient in his situation "would need to go three to five years without evidence of lesions," before doctors can say he's completely cured, Dr. Dale Shepard, an oncologist at the Cleveland Clinic, told the Times.

"His greatest risk was that he was going to get disease developed in new locations, but seemingly that hasn't happened," Shepard told the Times.

Regardless of his recovery's course, Carter's congregation and faith are instrumental, according to The Guardian. He indicated the gestures "closest to his heart" post-cancer diagnosis came from Plains residents.

"My roots are there, and my closest friends are there, and our little church is there, which is very important to me," Carter said in the packed church in August, according to The Guardian. "So Plains has just been the focal point of [my family's] life." 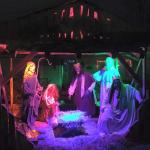 This Zombie Nativity Scene is Back For a…