Why Being a Grandparent Matters

A Grandparent Not Only Influences One Grandchild, But Future Generations.

Editor's note: This article was originally published on Lori Cluff Schade's blog. It has been modified and republished here with permission.

When my dad passed away a few years ago, one of the saddest things about it for me as the youngest of six children was that my younger children wouldn't experience his amazing personality. I was already sad that my mom was gone and my kids wouldn't be on the receiving end of her endless generosity. Research demonstrates consistently that grandparents are potentially significantly influential in the cognitive, social and emotional development of children. Positive grandparenting interactions are protective for children and can even moderate some negative childhood experiences.

I have had many opportunities to meet with people in therapy who are faced with various life transitions. Sometimes, there has been a rupture in the family structure with loss of family members due to death or divorce or children leaving home. Sometimes, there are job changes based on unemployment or retirement. Sometimes, normal aging processes and health challenges require transitions into new routines with limitations. In these situations, it is common to experience stress, often accompanied by fear of the unknown and discomfort with the unfamiliar. People often experience a type of existential angst about their identities, purpose and meaning.

Create a legacy through grandparenting

I like to introduce the idea of creating legacies through grandparenting, which is a frequently overlooked role in modern American life. I often ask, "Have you thought about what kind of grandparent you want to be? Do you realize how many potentially positive memories you can create for your grandchildren that can have a generational impact?" It's one of the few ways to really create an enduring legacy.

I only knew one of my four grandparents, but my little Swedish maternal grandmother was at the forefront of my life in shaping my identity and self-concept. I spent a lot of time with her when I was young while my mother was recovering from back surgery. Grandma had been widowed, and I kept her company while she kept me out of my mom's hair. Her nurturing was key in my experiencing the world as a safe and happy place.

Her memory jumps out at me in unexpected ways. The other day, I walked into a market and was ecstatic to see a display of seasonal persimmons for sale. I literally felt a wave of positive emotion connected to my maternal grandmother, who had introduced me to the unique fruit almost five decades earlier. I bought a bag of them and took them home. As I bit into one, I was transported to her green-carpeted family room floor, where I would lie, listening to Swedish learning records she would play for me every time I visited. I found that if I listened to the records and could then recite back to her many of the words I remembered, she would comment on how brilliant I was and brag to her friends about my intellectual skills. I didn't care that her exaggerations were inaccurate; it gave me the feeling that someone believed in me and fueled my motivation to learn.

She and I had established a ritual upon entering her home in which she would ask me if I wanted something to eat. She wasn't the type of grandma to bake cakes and cookies, but she always had produce that my mother didn't keep at our house. This included more practical simple dishes, like sautéed spinach with lemon on the side, which was my standard snack food at her home. She had a predilection toward unusual fruits and vegetables, and it seemed like every time I visited, she would introduce something new to my developing palate.

On one visit, she showed me how to eat an artichoke. On another, she made me sautéed parsnips, and to this day the nutty flavor and texture of parsnips is associated with a warm hug and smile from my grandmother. She introduced me to the small tangy kumquats that grew on a tree in her backyard, and eating them became a sort of Fear Factor challenge. I have developed a near-obsession with acquiring boiled peanuts, since she kept cans of them procured from relatives in my grandfather's native Florida. I am often bringing home unique fruits and vegetables to my children, and when I was explaining persimmons to my daughter and how my grandmother taught me how to eat them, she said, "Oh, that's why you like all those weird fruits and vegetables."

Grandma was persistently cheery and smiled a lot, and if I needed correction, she always used a gentle approach to redirect my actions. I don't ever remember her raising her voice at me. In her spare time, she had a practice of driving all of her widowed friends who no longer drove vehicles to their doctor appointments. She told me fascinating stories about when she was a child, like dancing around the Christmas tree on Christmas Eve in the Swedish tradition, or about sledding in Salt Lake City, Utah (her Swedish parents emigrated from Sweden to Utah in the late 1800s). For a southern California girl, the thought of having snow in my yard was surreal and I never tired of her descriptions.

In short, she was literally one of the friendliest and most service-oriented people I knew, and she made me feel like I was valuable in the world. When she died at age 90, and I helped dress her for her funeral, I was heavily impacted by the realization that none of her earthly possessions had followed her beyond mortality, but that the relationship she cultivated with me would potentially influence generations of people. Simply stated, intentional grandparenting is one of life's grandest gifts. I look forward to being a grandma. It matters. 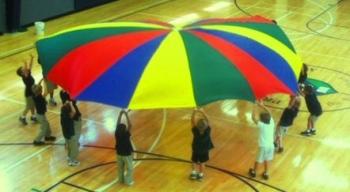