Why Physical Punishment is Never Appropriate For Children

Physical punishment is a major public health problem in the United States today.

Children are complex beings and often are not given enough credit. According to the studies of professionals in the pediatric field, Darwin, Tomkins, and Elkman agree that human babies are born with a variety of responsiveness to stimuli. Some of these feelings are interest, enjoyment, surprise, distress, anger, fear, shame, disgust, or even the inability to smell.

Physical punishment of a child can create unwanted feelings such as distress, anger, fear, and shame. Renowned American pediatrician, Benjamin Spock, did not support physical punishment, and a lot of his work was centered on other forms of reprimand. Dr. Spock strongly believed that children could be parented to be well behaved, cooperative, and polite without ever having been punished physically. He also believed that parents should strive to be more nurturing.

Think about it. If an adult is hit by another adult, that is classified as assault and battery. This act of violence could be a combination of spanking, hitting, pinching, paddling, whipping, and slapping. Other physical punishments that often are miscategorized are making someone eat soap, hot sauce, hot pepper, or other unpleasant substances.

So, why is the physical punishment of a child different? Children do not need pain to learn. We don’t allow aggression amongst adults; therefore, physically punishing a child is a double standard, and children should be protected against violence.

Relationships between parents and children can be deeply affected by a parent’s aggression. Not only do children lose respect for their parents, but the quality of their parent-child relationship could be jeopardized. Physical punishment can cause a child to become scared of their parent, feel uncomfortable talking about serious issues with their parent, and create animosity of a parent, which could lead to low self-esteem and confidence issues. Spanking and other forms of punishment can elevate a child’s aggression levels, and those intense levels can have serious effects on their general attitudes and outlooks as an adult.

“Hitting children does not teach them right from wrong,” says Elizabeth Gershoff, Ph.D., an expert on the effects of corporal punishment on children, who provided research for the resolution. “Spanking gets their attention, but they have not internalized why they should do the right thing in the future. They may behave when the adult is there but do whatever they want at other times.”

Most parents raise their children the way they were raised, which reinforces the continuous circle of punishment that exists. As parents, we must strive to be better and not repeat the negativity that occurred in our lives. Parents should do the research, talk to professionals, and discuss alternatives to reprimand their children. Some alternative ways parents can handle inappropriate behavior could be conveying anxiety about a dangerous action, taking away privileges, or using praise to shape behavior.

Parents should learn when and when not to respond to their child’s behavior. Sometimes, depending on their age, ignoring your child’s behavior is a strategy and not a lazy move. If you are having difficulty with other approaches, consider speaking with your child’s pediatrician, a child, an adolescent psychiatrist, or another qualified mental health professional that specializes in behavioral problems with children.

Nevertheless, parents should not spank their children. The American Academy of Pediatrics has strongly warned against the harmful effects of corporal punishment in the home. One of the most important relationships parents have is with their children, and inciting fear and violence into a loving relationship with a child can create long-lasting effects. Physical punishment is not an effective strategy to teach right from wrong.

If you’re interested in reading more about discipline and parenting, here are our book recommendations. 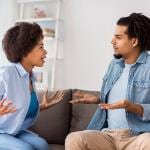 7 Signs You Are Dating Someone Toxic