Parenting is Hard, and is Only Made Harder When You Find That Your Words May Be Causing Lasting Damage. in Order to Help You Make Your Words Count, We Have Brought You 10 Phrases You're Saying to Your Child That Are Actually Hurting Them.

If there's one common goal in parenting, it would be getting your child successfully to adulthood without doing too much damage in the process. But with all the stressors that come with being a parent, it is almost impossible to get your child there completely unscathed.

In order to lessen the potential damage and hopefully improve the chances that your child will bloom and thrive as a confident and happy adult, here is a list of 10 phrases you're saying to your child that are actually hurting them.

For years parents have been told not to compare children to other siblings or children, yet it still happens. Comparing your children has never been an effective motivational tool and has in fact been proven to have an adverse effect.

Instead, embrace each child for who he or she is, and celebrate whatever accomplishments they achieve.

Comparisons don't always happen between two children but can often be done within the same child. Maybe your child used to be the star soccer player but has since lost interest or even talent.

If this happens, don't compare him to the way he once was. Instead, work on what he can become without looking back.

3. "You know better than that"

When your child does something that disappoints you, especially when it seems like common sense not to take that course of action, parents will often say things like, "You know better than that."

Rather than telling them they know better, take it as an opportunity to better teach them something they didn't quite grasp the first time.

If you are a stay-at-home parent who is constantly dealing with fighting or rebelling children, it is often easier to take the responsibility off of yourself by placing it on the parent who is not home. In order to do that, some parents will say, "Wait until your dad (or mom) gets home."

Sure, this may calm the situation for the time being, but you're jeopardizing the relationship between your spouse and child. In turn, your child will grow to fear that parent, and that parent will not have a chance to develop a good relationship with your child if he or she is always putting out fires when returning from work

When your child comes to you crying, a response that most parents have is to say, "Don't cry." This response is most often directed at boys, and has been found to cause harm.

According to a recent documentary titled, "The Mask You Live in," boys in the U.S. are more likely than girls to be diagnosed with a behavior disorder, prescribed stimulant medications, fail out of school, binge drink, commit a violent crime, and/or take their lives because they are not allowed to show feelings, particularly of sadness.

6. "If you don't eat all your vegetables, you won't get dessert"

In order to encourage their child to eat dinner, many parents will threaten with, "If you don't eat all your vegetables, you won't get dessert." While, in theory, this sounds effective, it does more harm than good.

Unknowingly, you are putting dessert on a higher plane than the food that is healthy for them by naming vegetables as the punishment and dessert as the reward. This can, in turn, create unhealthy eating habits that can be very difficult to break.

When your child goes against your wishes and ends up having the adverse effect that you foretold, it is hard not to say, "I told you so."

However, no matter how many times you say "I told you so," it won't ever change the situation at hand. It is merely a snide remark that gives you more power.
Rather than using this phrase, it would be more beneficial to help your child learn from the mistake and make the situation better.

Children are naturally curious, and will often ask questions about things that they may not be old enough to hear or perhaps regarding a topic that doesn't or shouldn't concern them. When this happens, parents often say,"It's none of your business."
Not only does this hurt the second it is said to the child, but it puts the child below you, causing long-lasting damage.

Instead, discuss why he or she can't have the information right now, but that there may be a day when you can talk about it.

When you set rules for your child to follow, you will likely have a quick response asking why. And, rather than getting into a long discussion with, say, your 12-year-old on why she isn't allowed to take her phone to her room at night, you tell her, "Because I said so," believing that your insertion of power will cause her to blindly obey.

While it may feel empowering to let that phrase come out of your mouth, it is really counterproductive.

Children not only want to know why, but they deserve to know why. Have that discussion, even if it is a hard one to have.

As a parent, you can spot danger or destruction a mile away. Whether it is a pair of hair cutting scissors, a permanent marker, a hot stovetop or inappropriate content on the internet, you want to make sure your children are protected from themselves and others.

Oftentimes your first line of defense is to say, things like, "Don't look" or "Don't touch." However, children are not all that different from adults when it comes to acting on urges, especially when told not to.

Rather than telling them not to, educate them on what the dangers are and why it is important to stay away. It is also important to put up safety barriers like a WebSafety app in order to lessen the likelihood that these dangers will be available to them.

Regardless of what you say to your child, it's important to think before you speak. Know that words can have a long-lasting effect, so make each word count.

Arianne is a freelance writer, frequently writing about fitness, family and running.
nextarticle 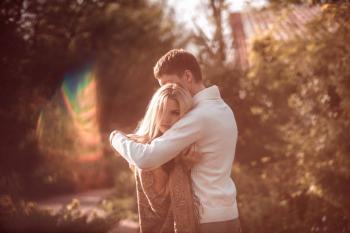 5 Reasons Why Your Relationship May Be Crippling…