Do You Suspect Your Husband May Have a Sex Addiction? Does Your Boyfriend's Behavior Just Not Add Up? Here Are 10 Common Red Flags That Show Your Loved One May Have an Addiction.

Addicts are masters of duplicity. You know, like Dr. Jekyll and Mr. Hyde. They have a faulty core belief that says, "If anyone knew who I really was, they would not love me."

One side of the addict tries to numb the pain of being broken, while the other side tries to take over to get as much of a fix as possible. One side manipulates and mistreats those close to them so they can continue to hide their secret, often not caring about the casualties. The other side cares deeply but can't face the addiction because of their shame.

People fighting addiction are not their loved ones' enemies. They are in a battle against their personal Goliath, fighting as hard as they can with what tools they have.

This article is for women who suspect their husbands or boyfriends may have an addiction and who are concerned about their loved one's behavior.

Here is a list of 10 common red flags that show that the person you are in a relationship with may have an addiction.

1. He can't keep his eyes from wandering when you're with him

Is he is always looking at other women, no matter where you are or what you are doing? Does he quickly look away when he sees you've noticed?

If you are on a date with a man, you - not other women - should be his main focus.

2. He lacks the desire to connect

Do you get invited to meet other couples, but your husband/boyfriend isn't interested? Do you talk to him and feel like you are talking to a brick wall? When your cute friends come around, is he suddenly interested and engaged? Would he rather play video games than have a meaningful conversation?

If your guy exhibits any of this behavior, chances are he could be hiding an addiction.

3. He won't let you have access to his electronic device

Men could care less if you check their phones ... unless they are trying to hide something. I have seen this over and over with wives of addicts. I don't care what excuse they use. Phone secrecy = trouble.

4. He has inappropriate pictures or sexual innuendos that you have foundon his device

Sexual websites and pictures do not show up in the history of a device unless the user has been looking. I talk to women all the time who are not tech-savvy. Their husbands convince them that they don't know how the pictures showed up on the devices.

Let me tell you how: They looked at those pictures and the phone saved the information. There is so much denial in this area. If you find inappropriate pictures, it wasn't an accident.

5. He turns the focus back to you when you bring a problem to his attention

If you answered yes to some or all of these questions, you're likely in a relationship with an addict.

Long-time addicts have been feeding the pleasure center of their brains for years. They don't want to do hard things. Their motto is, "Fun, fun, fun!"

Does he follow through with promises? Does he drop activities he planned with you if a better more exciting activity is presented?

Ask yourself, "When I really need (your significant other's name), does he drop everything to come help me?" If your man doesn't, you should be concerned.

7. He struggles with holding down a job or managing his money

Many addicts struggle to support their families. Often, the woman is the main and stable provider. I have also known addicts that have professional jobs; in these cases, there is just never enough money.

Can he hold down a steady job? How long has he been at his job? Is he a 30-year-old student without a bachelor's degree? Does he make $6,000 a month, but he can't pay for your dinner?

All of these things indicate there is a problem.

8. He is often caught lying

Addicts are liars. They have to be in order to keep up with their duplicate lives.

Whether the lie is big or small, it is still dishonest.

9. He can't make his actions congruent with his words

Addicts can be very smooth talkers. They are known for telling women exactly what women want to hear.

If he tells you that you are the only one for him, but then you see him flirting with another girl, his words and actions are not congruent.

Watch for this carefully because it is strong indicator that something is not right.

10. He dismisses what your gut tells you

If you feel something is off, it probably is. Trust your gut no matter how crazy another person tries to make you feel. Your intuition is a powerful tool, given to you by God, that warns you when something isn't right.

If you are involved with someone who has some or many of these behaviors, let a counselor help you get to the root of the problem. I have seen lives changed and families saved because people got the help they needed.

This article was originally published on Roots to Hold Me. It has been republished here with permission.

Norma Zaugg has an MA Degree in Education from Boise State University. She is the author of rootstoholdme.com, a faith-based blog about her healing from infidelity, codependence, and divorce. website: www.rootstoholdme.com Email: rootstoholdme
nextarticle 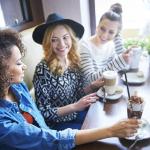 7 Ways Saturdays Are Destroying Your Marriage