Avoid These Men at All Costs.

Us guys come with all sorts of shapes and sizes, but here are the kind of guys you definitely should not put up with when it comes to relationships:

Not being able to commit to just you is a bad sign. It could mean a couple of things, all of which aren't what you want.

One option is that he's not sure of his feelings for you. He likes you but isn't sure if he likes you enough to be with just you. Those that suffer from a fear of commitment also fall under this category. They're afraid that by committing to you, they may miss the opportunity to be with someone that could potentially be better than you. You deserve someone that knows exactly how he feels about you.

Another option is that he's using you. He enjoys the attention and physical closeness, but that's all he's interested in. If this is the case, it's probably time for a serious talk.

You know, the guys that absolutely flip out over the most insignificant things. Constantly yelling at you is not appropriate. If he doesn't handle conflict appropriately, it's probably a good idea to steer clear until he shapes up.

Communication is absolutely, positively, irrevocably essential in a relationship. I cannot stress this point enough. If he is unwilling to communicate with you, it's time for a talk. He should be capable and willing to talk to you about his feelings (even though we generally hate it). He should talk to you about concerns, successes and all that personal stuff.

Some men don't communicate on accident (there's actually some research behind it) and others do it on purpose. For example, if I'm not fully committed in a relationship, it's much harder to communicate with my significant other. Deep communication breeds attachment, and if he doesn't want to get attached, he won't communicate.

He may be using the lack of communication as a defense mechanism for both him and you. He may like you (as a friend) and not want to hurt you as much as he otherwise would have had he built up more attachment through more effective communication. There's a strange nobility in that reasoning, but it fails to traverse the line into what is considered acceptable, and it still dooms the relationship.

This is a no-brainer. Abuse is completely unacceptable. Yes, there is always a place for forgiveness and progress - but that's a situation you're going to have to figure out with your significant other and someone more qualified than me. Be careful not to lie to yourself about the severity of the situation.

These are the guys that are constantly comparing you to other women. It seems like no matter how hard you try or how amazing you truly are, you're never quite enough for him. He's never satisfied with you. He destroys your self esteem. You feel horrible around him.

The truth is, you're amazing. He's just a jerk.

If he's more in love with himself than he is with you, he might fit in this category. The consequences of materialism and narcissism become evident with time - and they're not pretty. This is basically the adult version of that popular kid in high school that never ended up doing anything with his life. Make sure his priorities are straight before taking your relationship to the next level.

8. The manipulative type (the control freak)

Don't play that game. If you notice him trying to manipulate your feelings, call him out on it. Guilt trips are inappropriate. Manipulators too often turn into control freaks, so unless you'd like to sacrifice your free will and your identity for this guy, avoid the manipulators.

This is the guy that is absolutely and overwhelmingly obsessed with you. He has to keep tabs on you all day, every day. He's always with you, but even when he's not, he still knows exactly what you've been up to. If he would tone things back to an attachment level five that would be cute, but he's over 9,000 right now. Your man needs to respect that you've still got your own life to live, and he needs to chill out.

The stalker type and the jealous type usually come as a package deal. You can't so much as look in the same direction as another guy without him freaking out. He forces you to completely cut off contact with your male friends, even though you know they pose no threat.

Once upon a time I was living in a different country and got a letter from a friend whose fiance had demanded she break off contact with me or he wouldn't marry her. She did, but they broke up soon after. Avoid that guy.

Some women are attracted to a man with intense flaws (like the ones on this list), hoping that they'll be able to fix him, or reform him, turning him into the ideal man. Yes, men can change, BUT be wise. Don't let yourself get sucked into a destructive relationship. Don't be afraid to make the hard choice. 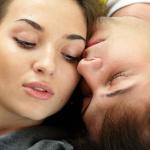 If You Answer Yes to These 16 Questions,…