Men are adorable and frustrating and handsome and hard-headed and wonderful and irritating and most often just plain silly. Try as we might, we just can't seem to understand them. Just when we think we know what makes them tick, they change routes and we are, once again, left baffled. Now, this may surprise you, but the men in our lives go to great lengths to hide many of their adorable quirks. Here are 13 such quirks that your man is probably still trying to hide from you:

Yes he does! Men try to pretend they don't care when you talk their ear off about the latest drama, but they do. They are just as intrigued (if not more so) than you and it doesn't stop there. They gossip with their guy friends. They probably don't call it that, but they definitely keep each other up to date on what's happening...and they love doing it.

2. He has tried all of your different lotions

He loves the way you smell, so it makes sense that he does a little testing behind your back. Your man may make fun of you for having so many cleansers and lotions, but he secretly loves it (which is why you probably go through your moisturizers way quicker than you think you should).

3. He uses your deodorant when his is gone

He can't help it, it smells so good and it is just sitting there! Plus, there is no reason to go buy more deodorant when there is still some in the house. He's used it, you know he has.

This is actually kind of endearing as long as it doesn't cross the line to being creepy. He cares about you so he stalks your social media. And if he's not doing it to stay up to date on your life, he is doing it because he misses you.

5. He really isn't that funny

Sadly most of his jokes probably aren't even his own. You love to laugh, he loves to make you laugh and he's always saying something funny, but most of the time it isn't original material. That's OK though, it's adorable that he loves you so much he'll do anything to hear your laugh.

He still thinks he needs to hide them from you. Unfortunately for him, you know what they are even if he doesn't tell you. And you absolutely love him for it.

7. He definitely has a favorite rom com

He moans and groans when you suggest a chick flick for movie night, but he is secretly excited he can keep his action movies on the shelf when you pick out his favorite romantic comedy. He may joke and laugh about your "girly" movies, but when you're gone he probably watches them alone and lets out all his emotions.

8. He is in at least one bromantic relationship

Men and their bromances, I don't get it. I don't even think they really get it, which is why they try so hard to keep it under wraps. They are just as excited to see their old friends as you are.

9. He still plays with his childhood toys

He still has them and you know it. Maybe it is a comic book, an old action figure or his favorite Hot Wheel. Whatever it is that he claims is just a keepsake definitely gets actively played with when you're not around.

10. He takes selfies too

Yep, he spends hours trying to get that perfectly casual selfie and he is over the moon when it gets heart eyes and likes on his social media accounts. Men like to look good too!

11. He really loves his hair

12. He likes your chick music

He is probably embarrassed that "his jam" comes from an artist like Miley Cyrus, Katy Perry or Ke$ha, but alone in his car he belts out every word. He may claim he only listens to them because he loves you, but that is obviously not true.

13. He overthinks your relationship

Men pretend to be passive and nonchalant, but they care just as much as you do about the relationship. It is always on their mind. They think about the pauses between texts and the hidden meaning in seemingly straightforward notes. They pretend not to care, but don't fall for it. They most definitely care.

We all do silly things on an everyday basis but when the quirks come to light, the love only grows deeper. Let your man know you love him, quirks and all. After all, isn't love realizing how weird someone is and loving them for it? 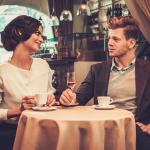 Who Should Really Pay For the Date?