If You're a Wife Who Has a Hard Time Giving Yourself Permission to Relax or Reward Yourself, Find Out Why Being "Selfish" Might Not Be the Horrible Thing You Think It Is.

The idea of being "selfish" might sound repugnant to a lot of wives. After all, isn't it the ultimate insult, and don't we do everything we can to avoid even a slight representation of this word?

Noam Shpancer, Ph.D. of Psychology Today said, "The desire not to be seen as - and not to feel - selfish seems to motivate and shape the lives of women more than the lives of men." We aspire constantly for the opposite: to be selfless and sacrificing for our families, sometimes at the cost of our own desires and comfort.

This is why, Shpancer said, "The average woman, perhaps more than the average man, may need a reminder that when making complicated calculations involving the needs of others, she should give sufficient weight to what she needs and wants for herself." After all, we forget sometimes that taking care of ourselves isn't selfish; it's necessary.

Here are four reasons wives should be a little selfish, and why they - and their husbands and children - should be OK with it.

1. Too often, women neglect their own needs and health

Men are better at taking time out for themselves than women, according to the 2014 American Time Use Survey. It found that "Men were more likely than women to participate in sports, exercise or recreation on a given day - 22 percent compared with 17 percent." Plus, "on days they participated, men also spent more time in these activities than did women - 1.8 hours compared with 1.3 hours."

So here's a challenge for all women: Try to do something just for yourself every day. It doesn't have to be big; in fact, it might just mean taking an extra 10 minutes to lie in bed in the morning doing nothing more than luxuriating in the feel of your soft sheets or reading a few pages of a new novel.

Or maybe it means going out and getting a fluffy bath robe you can put on after the shower and relax in for a few minutes in a warm, steam-filled bathroom, rather than immediately rushing to get ready for the day. Whatever you do, do it often and don't feel guilty about it. Your own happiness is just as important as that of every other member of your family.

2. Wives need the opportunity to exert their independence

Being independent isn't a problem for everyone, but some women do struggle with the idea that they're allowed to have their own wishes and desires beyond what's best for their family. Just because you're a wife or mother doesn't mean you aren't allowed to still have your own aspirations.

The Huffington Post put it this way: "It seems the women who do best in life are those who acknowledge their needs, honor their own perspective and adapt to changing circumstances."

Start today by making small goals for yourself. Maybe start learning a language or take a class through a local college. These desires aren't bad because they not only benefit you; the more you do for yourself and the more skills and experiences you accumulate, the better equipped you'll be to take care of your family.

3. Wives who take care of themselves can better care for their husbands

My sister worked for a summer at Yellowstone National Park in guest services. One of the questions she would often ask her guests was, "Will you have any children or pets staying with you?"

Wives would often smile, cast a sidelong glance at the man standing beside them, and say, "Does my husband count?"

Of course, most men are completely capable of taking care of themselves, but one of the perks of married life is having a partner who looks out for you and is willing to put your needs before her own. However, some women take this too far, and this doesn't bode well for anyone.

Eunae Cho, an assistant professor in psychology at the State University of New York at Albany, told Forbes.com, "My research found that when working married women take time for themselves, it's healthier not only for their own well-being, but they become less hostile to their husbands. So it's good for the husbands' well-being, too." The same advice could most certainly be applied to stay-at-home moms as well.

"My advice to working husbands is to let your wife spend time for herself every day," said Cho. "She'll be more pleasant and it will help you, too."

4. Women need to learn to reward themselves

Not only do wives need to be "selfish" at times in order to take better care of themselves, but they might also need the reminder that they're worth that extra time and energy.

This might be especially true of stay-at-home moms, says Today's Parent author Jennifer Pinarski. After all, she said, "There are no semi-annual performance reviews, fancy job titles or cash bonuses for doing a good job. ... These traditional ways of recognizing a job well done are huge in the working world." Your family isn't likely to give you an annual trophy for your room-cleaning efforts or a bonus for always having a nutritious dinner on the table at 6 p.m.

"While I'm not one to pout," Pinarski said, "not having that external recognition does start to eat away at the self-esteem of even the most confident mama." Which is why it's so important to reward yourself for all your hard work. Grant yourself a shopping spree once in a while, or at least don't begrudge yourself the allowance to get new clothes when you need them! Have a girl's night out with a friend to see a movie or eat out at your favorite restaurant. You'll return home feeling recharged and more ready to face the challenges of being a wife and mother.

For more ideas on how to spoil yourself once in a while, visit cariloha.com. 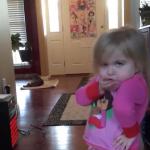 This Little Girl's Dance to Raise Awareness of…