When a man asks a woman to marry him, he is expecting to marry a woman who could be his best friend, number one supporter, and companion - not his mother. If you begin to treat your husband as your child, he will feel uncomfortable and perhaps offended.

When a man asks a woman to marry him, he is expecting to marry a woman who could be his best friend, number one supporter, and companion - not his mother. If you begin to treat your husband as your child, he will feel uncomfortable and perhaps offended. Tension and awkwardness could also develop between you and your husband. I learned this the hard way with my first marriage. Therefore, the following four suggestions are ways to avoid treating your husband as a child and more as a wife.

with your spouse. For example, if it was your husband's turn to wash the dishes or bring out the trash and he forgot, do not address the matter in a parental tone. Approach him nicely and remind him that it was his turn to do a certain task. There are plenty of times when my husband and I forget to do things, but we simply remind each other. There's no need to reprimand your husband.

Husbands, for the most part, do not enjoy being smothered. They need a moment to themselves. Wives go out shopping with their girlfriends, so it's only natural husbands want some time of their own. Maybe they want to spend a couple of hours with some buddies or spend time alone in one of the rooms in the house reading a book or playing a video game. If he happens to be out, it is not recommended to call or text him as frequent as you would your child asking when he is coming home. Whenever husbands and wives go out separately, usually a chat takes place before going out in which time frame is discussed among other details. Space needs to be respected. Trust must be given and received by both parties.

Do not criticize or belittle him

We all have different ways of performing tasks or handling situations. We do not all think or do things alike. It's not fair to criticize your husband if you feel something around the house was done incorrectly. Also, if your husband doesn't immediately grasp something you are suggesting or planning, do not belittle him. Give him time to process what you are saying.

regardless of how outlandish his ideas may be. When a child has a bizarre idea, usually the parent explains why that idea cannot come to fruition and the idea is put to rest. However, when it's a man with an outlandish idea, he wants to see it through. He wants to make it happen. As the wife, it is only natural to encourage and support him. If, by chance, the idea fails, then it was a lesson for him to learn. Do not say, "I told you so." Continue to support him. His idea was important to him, so it should be important to you, too.

Sometimes our husband's forgetfulness, ideas or attitude toward certain situations could frustrate us, but it doesn't give us the right to scold our husbands as we would a child. If the behavior is overwhelming, address the concern calmly and respectfully. Maybe he is not aware his behavior is troubling you. Just put yourself in his shoes. If your husband treated you as his daughter, how would you feel? Chances are you would feel uncomfortable. Your husband asked you to marry him because he aspired for a wife, not a mother. Remember, you are in a marriage and marriage is teamwork. 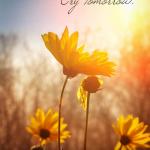 Is It Clinical Depression or Just the Blues?