5 Destructive Red Flags Men Look For in Their Relationships

Do Any of These Sound Familiar?

Red flags clue men and women in on when a relationship isn't going to work out. Though there are many red flags that both genders look for, these five are almost always deal-breakers for men:

Women are known to react with more emotion, unlike men who react more logically. Overreacting is a huge red flag that will encourage any man to end the relationship. Putting all the blame on him ("it's all your fault") and thinking all your past boyfriends are jerks are all examples of being emotionally outrageous.

No one likes double standards...but women can occasionally expect men to do things they don't want to do themselves. Here are a few examples:

Good, long-lasting relationships are hard and take time. Men pay attention to how how women have treated their past boyfriends and how they treat the people around them. Women who are rude to a waiter, who struggle to get along with other friends and family, have been unfaithful in past relationships and thinks she is above apologizing are huge red flags for any man.

Men and woman both need to be validated and appreciated in a relationship if things are going to work out. A woman who ignores the needs of her man and solely focuses on what she wants doesn't appreciate him and the effort he is making. If she jumps into the relationship without really getting to know and appreciate her mister, that's a red flag that she doesn't appreciate who he is as a person. Women who disrespect personal boundaries and who lack gratitude also fall into this category.

If she doesn't care to work hard now, why would she in your relationship? Laziness is a relationship killer. Women suffering from the "princess syndrome" expect to be handed everything on a silver platter - from money, to food, to shoes. She's unwilling to work for the things she wants. Another sign of a missing work ethic is a blank resume. A woman who has never tried to work and has avoided school has never made an effort to work hard. Women in this category are unwilling to push through and make a relationship last when things get tough.

Women: these five red flags can trigger a breakup, so make sure you don't fall into any of these categories. Men, realize that no women is perfect, so be particular about what you call a deal breaker...but don't put up with a woman who doesn't treat you right. 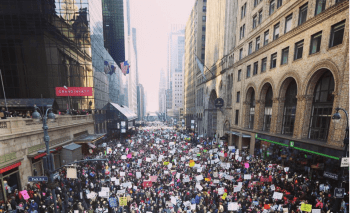 The Women's March Was the Biggest Protest in…