Snooping and spying on your partner might be a routine in your relationship. You may think it's totally fine to crack your partner's password to get access to all his goodies. But this kind of thinking is very unhealthy.

Sharing an email account can make joint communications easier to deal with. Just like joint bank accounts and sharing a mortgage or car, sharing an email account is a natural step. But that doesn't mean you automatically have access to your partner's private emails. Don't badger him into letting you see his messages, either. He doesn't have to show you his just because you show him yours.

If your guy wants to give you his email password, that's fair game. But if he doesn't, that means those messages are for him only. If you suspect him of wrongdoing and want to read his correspondence, your relationship is already in trouble whether you get access to his private emails or not.

The same goes for his text messages. It's a safeguard to have a password on your smartphone these days. But if his phone is password protected, it means checking his texts is off-limits. Healthy couples don't need to see each other's texts. They have an instinctive trust. And if something seems suspicious, they'll have an open conversation about whatever is bothering them.

Eavesdropping on phone calls is also banned in healthy relationships. If your partner signals you to stick around while they finish their conversation, you're in the clear. But if you run into your partner on a call, leave them alone until it's over. Whatever was said can be relayed later.

Tracing your partner's movements with a hidden device or tracking app is a big no-no. Healthy couples don't need to keep such close tabs on each other. Your man may keep his smartphone location on intentionally to ease your worries, but it's his choice to make his whereabouts known. And he can turn it off when he pleases.

When you're in a long-term committed relationship, you and your partner should trust each other enough to share passwords. This level of trust shows that you're comfortable with each other and that you have nothing to hide. That doesn't mean you should snoop around every chance you get, though.

Getting over a past betrayal is hard. If you've discovered a cheating lover or caught someone in a lie, it may be tempting to investigate your current partner. The problem is, they're probably not doing anything wrong. Being suspicious will convict them of crimes they've yet to commit.

You may think you can't trust anyone. But by engaging in this privacy violating behavior, you are the one who is breaking their trust. So take a step back and evaluate your trust instead of investigating their secrets. 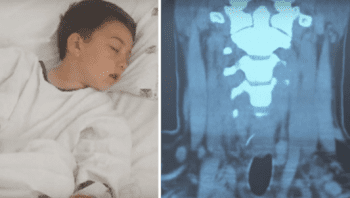 Child Feels Tingling in His Throat; Doctor is…