5 reasons to give thanks for your relationship

People in Committed Relationships Have Better Health, Longer Life Expectancy and Are, Overall, More Happy. Here Are Some Other Things in Your Relationship You Should Be Thankful For.

You hear people complain all the time about their relationship: "He never picks up after himself!", "She never lets me go anywhere or do anything!, "He/She always wants to go to his/her parents' house on the holidays!". With all the complaining you hear, it's a wonder why couples get into relationships at all! But underneath the complaining and fighting, there are a lot of good things that come from relationships. With Thanksgiving just around the corner, here are a few things your relationship does for you that you should be thankful for.

You've heard your married friends say that their spouse will be the death of them, right? Well, despite how much stress your marriage might cause, your spouse is actually doing you a favor by helping you live longer. While there's no direct explanation for this phenomenon, one study found that people who reported being married in their middle age years actually outlived their never married counterparts. Thanks, honey!

2. People in long-term relationships are happier

You see couples fighting on TV, you hear them in their homes, and you even see them bring their fighting into the grocery store! No matter how much you see couples fight, the fact is that couples who are in long-term, committed relationships actually report being happier than their single friends. That's certainly something to be thankful for.

As much as you hear couples complain about their sex lives they're actually having better, more satisfying sex than their single counterparts. Studies show that couples in married or long-term monogamous relationships report having higher satisfaction in sex and even more frequency of sex.

Despite how much couples complain that their partner drives them crazy, research shows the opposite is true. In fact, couples in marriages and other long-term relationships have shown to have less instances of depression and other mental health challenges like anxiety.

So despite all the insanity that comes with holidays, in-laws and the endless family outings this time of year, be sure to thank your partner for bringing you a little more sanity into your life.

Research from several studiesshows that married couples and others in long-term relationships are overall healthier. They have fewer instances of colds, pneumonia, and even less instances of heart disease and cancer. So while you hear couples say they are sick and tired of their partner, they actually are less sick because of their partner. Funny how that works, isn't it?

Yes, it's easy to complain about your relationship. But despite how much your partner stresses you out, makes you angry or makes you shake your head in bewilderment, don't forget to give your partner a big, warm hug and tell them thank you for all the good things they do for you. They're doing you more good than you know. 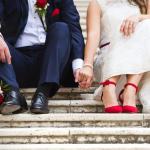 You Probably Think Your Marriage is Awesome, and…