You may tell everyone you're platonic. But these five signs mean your guy friend is interested in you.

You may think it's easy to have platonic male friends. But things often become complicated when guys and girls get to know each other. Spending time together can conjure up feelings in unexpected places. And it might be time to admit your good male friend is actually interested in you. Here are five signs to help you figure it out:

1. He looks at you when you're not looking

When you and your guy friend are in close quarters, your eye contact can be casual or intense. But what's more important is how closely you watch each other when you are separated by some distance. Looking at someone when they're not looking is a classic sign of attraction and romantic interest. If you find he's gazing at you from afar, he's almost certainly nursing a crush. So if you catch him in the act a few times, you might have a not-so-secret admirer.

Your buddy may not become outwardly hostile toward any dates you bring around. But if he's interested in you, he may seem uneasy, nervous or upset after hearing about a new suitor. He may come off as skeptical and ride your new guy a little hard. Or he will go out of his way not to be around you or your date when you're together. If a guy friend gets upset when you date other guys, he's definitely jealous and cares about you more than he's willing to admit.

3. He doesn't date other people

If your friend is a great guy with a lot to offer but you find he's not really interested in hooking up with anyone, he might be saving himself for someone special. He's particularly stubborn about responding to advances from other women if you are around. He may accept fleeting flirtations for his own entertainment, but he always comes up with a reason he doesn't want to give another girl a chance. Even if you encourage him to explore the dating scene, he'd rather just hang out with you.

4. He needs your approval for dating

If he does ever decide to take a chance on a woman, he needs to know you're OK with it. He will tell you everything about his new girl and make sure you approve of her. He may bring her around and gauge whether or not the relationship continues on how much you like her. If you voice a concern about her or their relationship, he will take it very seriously and address it right away. She may remind you of yourself and have a lot in common with you or be the complete opposite. But he'll aim not to have his relationship eclipse your friendship.

5. He opens up to you the most

Even if your friend ends up getting serious with another girl, he'll still keep you closest. He considers you his most important confidant and comes to you for support. Your friend may be interested in you if you always know more about him than the people he dates. He opens up to you and lets you into his life in a much more significant way than his girlfriend. And when things start to get tough in his love life, you're guaranteed to be the first to know.

Each of these signs on their own may not mean your friend fancies you. But several signs put together paint a picture of impending romance, if you're both open to explore it. Dating your friend can be a tricky road to navigate. But getting over the stumbling blocks and unearthing the feelings comes first. So keep your friend close and commit to maintaining the loyalty, support and affection you've always had. 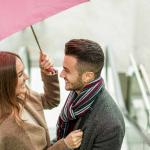