Real Truths and What to Do About Them.

Every woman goes through a season of not wanting to have sex. Back-to-back meetings, birthday parties, meal prep, career goals, finances, children, and so much are just some of thing things most women are responsible for on a day-to-day basis. “It’s normal for there to be an ebb and flow in sexual desire in a marriage,” says Ramani Durvasula, PhD, a licensed clinical psychologist, and author of Should I Stay or Should I Go?

Even though there are stressors in life, it is important for women to be proactive and educated on sex. There are legitimate reasons, proven by surveys and studies, explaining why a woman doesn’t want to be sexually engaged.

Body image is a real issue that sticks with women throughout their entire lives. If a woman suffered any abuse or struggled with feeling confident when she was younger, those issues can translate into deeper struggles when she becomes an adult. Janet Brito, PhD, a clinical psychologist and sexologist found, “If you feel good about yourself and appreciate your body, you’re more likely to be open to sexual activities.”

Without being overly cliché, husbands should reinforce positive messages to their wife. These phrases should remind her how beautiful her husband thinks she is and articulate he finds her attractive. Those verbal affirmations will remind your wife that you’re physically attracted to her and help her build a stronger self-image.

Women usually take on the majority of household stress. From planning birthday parties to continuously cleaning and from cooking meals to working, the to-do list can oftentimes feel endless and impossible. The stress can boil over to a couple’s sex life. However, sex shouldn’t be another thing a wife must cross off her to-do list. Husbands should consider setting the mood and releasing the stress from his wife’s responsibilities.

Be intentional and carve out time for sex. Consider the things that relaxes and soothes your wife – maybe it is a bubble bath or creating ambiance in the bedroom. Sex is an essential part of every marriage and putting it on the back burner will only harm the relationship.

She has too much to balance.

Oftentimes women are subconsciously named into multiple roles – wife, mother, businesswoman, daughter, caregiver, cook, cleaner, etc. If your wife is taking on too much, she won’t be interested or have the energy to engage in sex. A husband should be observant and consider communicating the imbalance to his wife. Once the couple has discussed the imbalance, they can strategize a plan to create more equal roles. Men shouldn’t just take over – communication is key! While it is nice to lighten your wife’s load, it can be confusing if you don’t explain why you’re taking on a role.

The sex is boring or stale.

Sometimes sex with the same person can feel scheduled and somewhat boring. It is important to continue to date your spouse. Nonetheless, dating your spouse means not taking them for granted and looking for ways to spice things up. Dr. Durvasula recommends taking a vacation together, having sex in a hotel, or having sex in new positions. If none of that works, she recommends couples therapy. Discussing sexual stagnancy can lend itself to creating a strong foundation. In many cases, both individuals may feel bored but if no one voices their concerns, sex will be unpleasurable.

She is bummed about a relationship conflict.

Dr. Brito says, “Some folks won’t be interested in having sex after a fight, while others will use sex to repair the rupture.” A woman will not be interested in having sex with their husband if they are not particularly fond of their husband due to a disagreement. If an argument or conflict is lingering, it is important to discuss the issues that contributed to the problem. Get to the root of the issues and identify ways you can solve the conflict.

Additionally, be proactive and agree to discuss conflicts versus allowing them to simmer and overlap. Being open and willing to discuss your disagreements will make you a stronger couple and improve your sex life.

Getting a proper amount of sleep is key to performing on many levels – including sex. If a woman is not getting the amount of sleep she needs to feel energized, she will not be in the mood to have sex. Sleep deprivation can be seasonal and in other cases it can be the product of being stressed and/or anxious.

If your wife needs more time to sleep, consider taking on extra chores so she can get a nap or go to bed earlier. While this won’t initially lead to sex, as she gets more sleep, your wife will be more willing to have sex because she will be well rested.

She is on birth control.

There are hormones in birth control and the reaction can vary from woman to woman, depending on her body chemistry and the hormone mixture in the pill. If a woman is taking birth control and feels a change in her sex drive, it is a good idea for her to visit the doctor and have an honest conversation about the pill’s effects. There are other birth control options to choose from that won’t impact a woman’s sex life.

Sex doesn’t need to be complicated. Men shouldn’t take offense if their wife doesn’t want to have sex. Instead of being disappointed, a husband should communicate with his wife and discuss ways they can work together to improve their sex life. Nonetheless, act of sex should never be placed upon one person and the absence of real conversations about sex shouldn’t be swept under the rug. 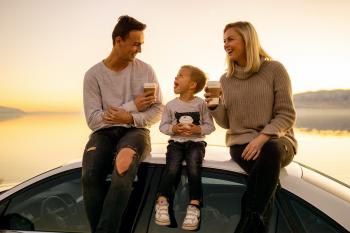 Spend Less Every Month With This Car Insurance