Have You Ever Said or Heard Any of These Things Before?

Most men like to appear tough, as though they are invincible, and can't be fazed by anything. This construed expectation of the male persona is largely due to society and the media's portrayal of macho men-those who are without feelings or the ability to experience pain.

However, this is far from reality.

Because, like women, men also feel hollow whenever the person they love the most flings an extremely hurtful comment at them. Though this problem sometimes seems one-sided, it goes both ways and isn't only limited to men who belittle their wives.

Here are the 12 most soul-crushing things wives needs to stop saying to her husbands.

Men identify themselves and determine their self-worth through their profession and how well they're able to provide for their family. Attacking this huge part of who they are can really destroy their self-esteem, especially when it comes from their wife-the primary person they go to work every day.

This low blow can both hurt and confuse your man. A wife who uses this or a similar phrase only sends the message to her husband that he can't relate to her on her level. Good husbands have the desire to protect and be equal with their wives, not control them.

Assuming that you're husband is trying to do the latter is immature and creates an instant communication barrier between you and your spouse.

This type of talk accomplishes nothing. The thing your husband forgot to do is still undone. Saying something like this only sounds as though you think he intentionally chooses not to do what you expect of him.

Like you, your husband has a ton on his mind, such as work, money, bills, helping raise the kids, taking the car into the shop, exercising, cleaning the garage, working on the yard and a thousand other things.

Give the guy a break the next time he slips up and offer ways to help him remember, rather than constantly nagging him.

A phrase like this can crush any husband's soul. When his wife says this, she's tearing him down by comparing him to someone she no longer wants in her life.

If your husband is doing something you don't like, take the time to discuss the problem without bringing up past partners or using failed relationships as a weapon.

5. "Why are you always so insensitive?"

Men and women have very different emotional responses. What's a big deal to a woman might not always seem as important to a man, and vise versa.

Accusing your husband of being insensitive makes him feel like a failure. Share your feelings with him instead of automatically expecting him to know how you feel.

6. "I wish you could be more like (insert name of another male)."

Comparing your husband to other men can cut him to the very core. Doing so shows that you're paying more attention to others than you are to him. He wants to be the best he can be for you, but he shouldn't have to transform into another person in order to make you happy.

Everyone needs to be able to rest and relax in his or her own way. It is more helpful to ask yourself this question: Do you really think your husband is lazy, or are you just annoyed with how he chooses to use his free time?

Your husband most likely doesn't see himself as a lazy person so express how you really feel in a genuine, non-combative way. Always offer to help, rather than criticizing his behavior.

Husbands actually do listen to their wives, but they aren't perfect and make mistakes just like everyone else. Let your husband know you value his opinion and that you want to be able to connect with him through conversation.

Throwing out extreme generalizations like these can cause your husband a lot of pain. It shows him that you're ignoring the positive attributes of his personality and are only focusing on the negative things he does.

The bottom line is that your husband loves you and he wants to make you happy. However, you didn't marry him because he was without flaws. You married him for who he is and because of how he makes you feel. If you remember this in all you do and say, then your husband will never doubt the love you have for him. 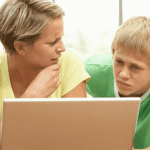 How This Brilliant Mom Protected Her Sons Online…