Adam Levine in a cheating scandal after Instagram model speaks out about alleged affair.

Adam Levine is in hot water after Instagram model, Sumner Stroh, revealed in a TikTok video that her and Levine had allegedly had a year long affair together. The news comes just days after Levine's wife and Victoria's Secret model, Behati Prinsloo, announced her third pregnancy with the singer.

Stroh claims that she was tricked and manipulated by Levine into having an affair with him. She said that it happened at a point in her life when she was young and naïve, saying that now she feelings like she's been exploited by this. In her TikTok video, she showed  a series of alleged screenshots of her conversations with Levine, one of them more shocking than others. Stroh shares a screenshot of a message from Levine that she claims came after months of radio silence from him where he says, "Ok serious question. I’m having another baby and if it’s a boy I really wanna name it Sumner. You ok with that? DEAD serious."

Levine has since responded to these allegations by saying, "I used poor judgment in speaking with anyone other than my wife in ANY kind of flirtatious manner. I did not have an affair, nevertheless, I crossed the line during a regrettable period of my life" he told TMZ. He continued by saying, "In certain instances it became inappropriate. I have addressed that and taken proactive steps to remedy this with my family." In regards to his wife and kids, Levine said, "My wife and my family is all I care about in this world. To be this naïve and stupid enough to risk the only thing that truly matters to me was the greatest mistake I could ever make. I will never make it again. I take full responsibility. We will get through it and we will get through it together." Prinsloo has yet to release a statement on the matter.

Levine and Prinsloo have been together since 2012. They briefly broke up in 2013, but got back together months later and announced their engagement. The pair tied the knot just a year later in 2014 and have been together ever since. The couple shares two children, Dusty Rose, 5, and Gio Grace, 4, and have a third child on the way. 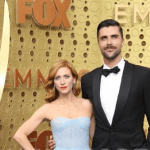