Advice for couples: Don’t just be hydrogen and oxygen. Be water!

The reality is that complete commitment to the one you love does not lessen you as an individual. It enhances you - like the fusing of hydrogen and oxygen to form clear, life-giving water!

_Editor's note: This is the first article in a three-part series on commitment. Read the preface to this series, "Should you trade your independence for interdependence?"

We hope this article will clarify why we advocate interdependence and convince you that real commitment to the one you love - formal commitment, forever commitment - is something that adds to your freedom, your joy and your options, not something that subtracts from these things.

If you know you are in love but are having a hard time deciding if your partner is really the person for you, if the commitment of marriage frightens you a bit, here are three points of advice:

1. Understand that, while you want to be as "sure" as possible, marriage is always a leap of faith.

If it feels right to your heart and to your brain, if you've asked the right questions and thought through any major potential problems in the relationship, then what you need to do is to make a decision. If you are a person of faith, take your decision to God in prayer and ask for confirmation, for peace, for a feeling of light and right about the decision you have made. Do this individually and together with your partner. If you feel the peace of confirmation, set your marriage date!

2. Understand that commitment is not something you do after a lot of experimenting, living together and trying to prove to yourselves that you're completely compatible.

That's just not likely to happen, and this misconception is why the split-up percentage is far higher among cohabitating couples that it is among married couples. The simple fact is that every couple has tough times, but it's the commitment that gets couples through those tough times.

3. If you hope to have children, think of those children now!

Are those children better off coming to a couple that has made the commitment of marriage? Even if you want to put off having kids (as many cohabitating couples say they do), things don't always work out that way. A child's chances of living with both parents throughout his childhood are dramatically higher if his parents are married. And the idea that you can't afford marriage usually doesn't hold water. Marriages don't have to be expensive affairs, and the fact is that two or three people can live together more economically than they can live separately.

Now, before this article starts sounding too preachy, lets pull back and think of an analogy or a metaphor. The reason so many from the millenial generation shy away from marriage is that they prize their independence and they love the freedom and options that come with being single. When they find partners, cohabitation seems a more gradual step, one that does not sacrifice their independence quite as much.

The reality is that commitment will not lessen you as an individual. It enhances you. You are still you, and you still have your views, your opinions, your skills, and your own unique nature as much as you ever did. When approached with love and commitment, marriage creates an almost magical synergy where the total is greater than the sum of its parts. There is still you, and there is still your spouse, and neither gives up any of his or her essence; however, there is also the combined entity of "us," complementing individual strengths and compensating for individual weaknesses.

The metaphor is water. Hydrogen, by itself, is a gas possessing many unique properties. Oxygen is another gas with its own set of qualities. But when they are combined (in a committed, fused sort of way), they become the clear, flowing, life-giving marvel called water!

Life is not always easy for water. It can be evaporated, frozen, even dammed. But what a miracle water is! Water can do things, go places and bring about results that neither hydrogen nor oxygen by themselves could even imagine.

The hydrogen is still hydrogen. It has not lost or given up any of what it is. The same with the oxygen. But by combining, by joining, by committing to each other, the two become something more - something much more. And they and the whole world are better off for it. 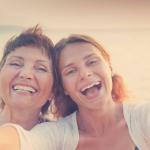 6 Keys to Having a Healthy Relationship With…