Are You a Believer? Why Believers Make Better Marriages

According to Recent Studies, Those Who Believe in God and Attend Their Chosen Church Regularly Have a Significantly Lower Divorce Rate Than the National Average. Here Are the Reasons Why I Think That Believers Make Better Marriages.

Marriage is one of the greatest and most rewarding journeys we can take in life. Sometimes, it can also be the most difficult. It carries with it both trials and blessings. It is a commitment that the average person does not enter into without careful contemplation of what the road ahead will require. With over half of marriages ending in divorce, what are the best odds of having a marriage that will last? According to recent studies, those who believe in God and attend their chosen church regularly have a significantly lower divorce rate than the national average. The answer just might be to become a believer, and make sure to marry one, too. There is no hard evidence supporting why believers make the best marriages. Yet, in my own life and marriage of thirteen years, I know that our belief in God has certainly enriched our marriage and made it stronger. Here are 4 reasons why I think believers make better marriages.

Believers depend on God rather than co-depending on each other

A husband and wife with a strong belief in God will depend on God for the source of strength and happiness. They will understand that every good thing comes from God, but it is through their own individual efforts that God gives His blessings. A husband and wife not practicing this belief may depend on each other as a source of happiness. When one or the other is found lacking, disappointment can linger in the marriage and have a lasting negative effect.

When difficulties come, believers fall to their knees, not their vices

Difficulties in life are constant and will find their way into any marriage. When those difficulties arise, it is not the circumstances that will define the person, but the actions taken in those circumstances. Some may fall to drinking, others to drugs, some may fall to anger, or violence; all of which can destroy a marriage. Believers, however, most often fall to their knees. They know that, in the darkest night, the light will come through the action of prayer. They will find peace and answers to their troubles and strength to their marriage.

Their marriage is a 3-way contract, rather than just 2

When they marry, believers not only make commitments to each other, they make a commitment to God. Believers strive to keep their marriages together because breaking their vows to their spouse would also be breaking their commitment to God. Believers also begin their marriage united in purpose and faith. Their marriage begins with a foundation already in place. A common belief in God means a common belief in the fundamental religious principles God is founded upon such as honesty, charity, kindness, goodness, and love. Others may build their marriage on the same characteristics. However, they will have to work from scratch building a foundation from which to start; discussing every aspect of their beliefs starting from a very fundamental level.

When the sailing gets rough, believers have a sure anchor

Believers have happier marriages because they have hope and a sense of peace. When storms come, they can hope for a better world because they have someone they can trust whom they know will take them there. They are not drifting in a world without answers. They know where the answers are and how to find and receive those answers for themselves. Because they know how to find peace, they will not only be able to comfort themselves, they will be able to comfort one another in times of difficulty.

Although any marriage can be successful when two people are committed to each other, and both put the needs of their companion over the needs of themselves, I truly believe that when two people come together as believers, they can have a marriage that is one of the happiest and most lasting relationships possible. Marriage is a wonderful thing. In a world where the divorce rate is more than half, a couple who begins their marriage with the characteristics of God as its foundations, really can be together forever. 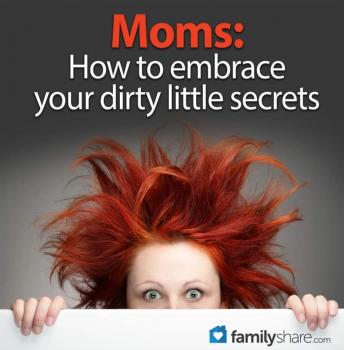 How to Embrace Your Dirty Little Secrets