The star opens up about her dating life.

Cher recently appeared on an episode of "The Kelly Clarkson Show" where she opened up about her younger boyfriend and why she won't date older men. Cher, 76, and Alexander Edwards, 36, debuted their relationship recently and have since been seen candidly holding hands out in public. When their relationship was brought up on the show, she gushed by saying, "On paper, it’s kind of ridiculous, but in real life, we get along great." She continued by saying, "He's fabulous, and I don't give men qualities that they don't deserve. He's very kind. He's very smart. He's very talented, and he's really funny. And I think he's quite handsome."

When Clarkson asked her about the rumor that older men were "intimidated" by her she responded, "If I hadn't met younger men in my life, I would have never had a date, because older men just didn't like me all that much. Do you know what I mean?" She clarified by saying, "I've had a couple boyfriends who were hovering around my age, but they just didn't like me for some reason. Younger men don't care if you're, you know, funny or outrageous and want to do stupid things and you have a strong personality. I'm not giving up my personality for anybody."

Last year, Cher opened up about her previous with Val Kilmer, where she talked about how she "still loves" him. "He's like nobody I've ever known," she wrote for People magazine. "He is exasperating and hysterical. Thrilling and funny, and doesn't do what anyone else does. I don't know how we stayed friends, we just did. We didn't try. We just were."

Her current relationship with Edwards has faced quite a bit of controversy given the 40 year age gap, but she recently responded to the haters on Twitter by saying,  "I’m Not Defending us. Haters are Gonna Hate…Doesn’t Matter That we’re Happy & Not Bothering Anyone." 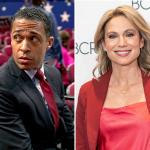