Could the secret to making a marriage work be as simple as sharing household chores?

Chores may play more of a role in your marriage than you think.

You often hear that a happy marriage is based on mutual respect, good communication and the ability to forgive and be patient with each other. But never in a million years would you have put their ability to complete chores on the list.

According to a 2007 study by the Pew Research Center, adults have now ranked sharing household chores as number three on a list of what makes a marriage work. That means 62 percent of the adults participating in the study believe that after faithfulness and a happy sexual relationship, sharing the responsibility of household chores is the third most important factor in a happy marriage.

"The Atlantic" also studied this issue and discovered something kind of surprising. Even in families where the mother worked outside the home along with the father and possibly spent longer hours or made more money than him, the mother still took on more household responsibilities.

This unspoken arrangement is exhausting. Knowing that she has to do so much work around the home after spending such long hours at work can make her resentful or create some built-up anger.

Why are chores so important in your marriage?

Men and women want to feel equal to each other, especially in a marriage. In a study recently published in "Sex Roles," 220 newlyweds were asked questions about how they divided up the responsibilities and how it has worked in their marriage.

After gathering the data, the results showed that when the division of household chores was uneven, it negatively affected the wife's satisfaction with the marriage.

In a press release, lead writer Author Brian G. Ogolsky shared, "If a woman believes that household chores should be divided equally, what happens if they adopt a traditional approach to the matter? The most satisfied couples have similar expectations and follow through on them."

Setting unrealistic expectations for your spouse can bring about great challenges. This doesn't mean you shouldn't assume your spouse will always love you, be faithful to you and never cheat on you. Those are things you both have promised to do.

It is when you begin to expect your husband will make the bed with you, pickup the groceries every Thursday and leave early from an important work meeting to pickup the kids from school that tension builds.

If you would like to divide the chores, you should sit down and discuss it. Explain the benefits of having him sweep the floor and you vacuuming the living room. Tell him you do not want to be the only one cleaning the home.

Assuming that he knows when you need help or that it is obvious how you expect him to pitch in as well reminds me of a quote from Gautama Buddha. "Holding onto anger is like drinking poison and expecting the other person to die."

Many couples know that housework can be a way to demonstrate love, whether it is making sure the house is clean to relieve stress from the working spouse or doing the chores that you know your spouse does not want to do.

Here are a few ways that you and your spouse can find balance in the household chores:

Based on a research study measuring the father's contribution in the home at the University of Maryland, the result revealed that men are stepping up to the plate. The difference between a man's amount of time spent each week on household chores doubled between 1965 and 2003. That isn't nearly as astonishing as the more than triple leap they took in childcare during the same years. Fathers used to spend 2.5 hours a week caring for their children, whereas now they spend more than 7 hours.

As the structure of the family has evolved over the past few centuries, it is predicted that the amount of work men and women do in the home will start to measure out to almost equal.

Chores should not create a wedge a between spouses. Use them to help you learn to work as a team. Not only will you feel respected, cared for and appreciated, but the toilets will be squeaky clean too. 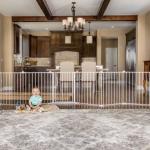