Does being divorced mean you’re a failure?

Let One of Our Experts Remind You That You Are Not a Failure Simply Because Your Marriage Failed. in This Article, Sharon Explores the Definition of a Vow and Offers Ways For You to Re-Examine Your Relationship and Strengthen Your Marriage.

What's the purpose of your wedding vows - those promises that seemed so easy to keep at the time - when now you're divorced? Does it mean you're a failure because you broke your vows?

According to Dictionary.com, a vow is "a solemn promise, pledge, or personal commitment." But the problem with most wedding vows is that the promises made are unrealistic because they are made in terms of "forever." Why is that unrealistic? Vows that represent forever are simply based on fairy tales of happily ever after that can end up making you feel like a failure if your marriage doesn't work. Life happens. And then divorce happens because of issues that are just too big to resolve. So the problem of "feeling like a failure" because you're divorced could be based on unrealistic promises - perpetuated by fantasy and happily ever after - made at the time we get married.

Because life has its own ideas for us, and rather than making promises that I might not be able to keep, I wrote my own wedding vows in a very realistic way. At the altar, and being the rebel that I am, I not only declared my love for my fiancé, which was very real and true, but I also proclaimed, "We've grown together, and we may grow apart." Life did take its turns, and we ended up divorcing 10 years later. Despite our best efforts, we did have difficult issues that we weren't able to resolve, and the pain of the divorce was very real, but I was fortunate that I didn't experience the added burden of feeling like a failure. I'm not professing that my realistic vows were the reason for this, but you can see how starry-eyed proclamations might contribute to feelings of failure in the future.

With my second marriage, I approached my vows in a similar manner, with some variations. We declared our love and appreciation for each other, as well as the qualities that we loved in one another. We spoke in terms of today - not tomorrow - not the next 50 years. That was 16 years ago. But who knows what the future holds for us? We're fortunate that we still love, respect and appreciate one another, but that doesn't come without nurturing our marriage on a day-to-day basis.

In our culture, and partly from the influence of fairy tales, we're encouraged to idealize our future with our new spouse rather than take a realistic approach to married life. Marriage takes hard work, and most of us don't entertain that idea at the time of our wedding. Divorce rates are at 50 percent, but we somehow think that we're going to be the exception to such a grim statistic. It's all around us. We all know someone who has been divorced. It's time to drop the fantasy and get real about marriage, and about promises that include "forever."

The advantages of being prepared for marriage

You spoke your vows, and you meant them at the time. So how did it happen that happily ever after turned into a divorce? How do you move on from feelings of failure? Here are three ways:

1. Let yourself off the hook

It's not your fault that you once vowed a lifetime of love, and it didn't work out. You had the best of intentions at the time, but fantasy didn't prepare you for the daily challenges of marriage. There are many questions that need to be asked and tools that need to be implemented before you make a marital commitment.

2. Mistakes don't make you a loser

Your marriage may have failed to work, but that doesn't make you a "failure" as a person. The sooner you realize this, the quicker the healing process from your divorce can start. Beating yourself up by labeling yourself a "failure" chips away at your self-esteem and makes you more depressed. So if you find yourself saying, "I'm a loser. I couldn't even make my marriage work. I'm worthless," - it's time to really process what happened in your marriage. By doing so, you'll see that there were many different circumstances that converged to make your marriage end. Upon reflection, even if you see that you made mistakes, which you will, the point is to learn from your mistakes and not conclude that you're a failure.

3. Good communication can change your future

Love and marriage can last forever, so begin by using your current relationship as a training ground for your future. Instead of sweeping issues under the rug, learn how to resolve conflict. This starts with working on your communication skills. Communication breakdown is the number one cause of marital discord, so it's essential to learn good communication skills in order to resolve future conflict and negotiate your differences.

With the understanding that marriage can last forever with hard work, commitment and kindness, next time around, let your vows be a reflection of the love that you feel for your partner and the reality of marriage - not promises based on fairy tales of magically living happily ever after.

We are a collection of nationally-known experts who specialize in the emotional, legal, physical, financial and relationship aspects of divorce and the change it brings about in your life. We are here to tell you that there is Hope After Divorce.
nextarticle 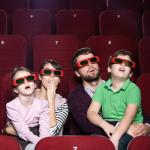 How to Pick the Right Movie For Your…