The actress says this is how she has no bad blood after relationships.

Gwyneth Paltrow recently opened up in a Q&A session on her Instagram stories about how she remains friends with her exes. The answer to this is "conscious uncoupling." The Oscar winner explained, “I really believe in conscious uncoupling. When you spend meaningful time with someone, it’s nice to have it morph into friendship. I don’t want to have bad blood with anyone, ever (if I can help it.)”

The popular term was first coined by licensed marriage and family therapist and author Katherine Woodward Thomas in 2009. According to Paltrow's brand, Goop, the term "conscious uncoupling" is described as, "The ability to understand that every irritation and argument within a relationship was a signal to look inside ourselves and identify a negative internal object that needed healing."

The Marvel Cinematic Universe actress first used the term in a personal essay written for Vogue when she announced her divorce from ex-husband Chris Martin. She discussed how she first discovered the term "conscious uncoupling" during their break up before their eventual divorce in 2016. Paltrow and the Coldplay singer married in 2003 and share two children together, Apple, 18 and Moses, 16.

In 2018, Paltrow tied the knot with producer and "Glee" co-creator Brad Falchuk and has gushed about how supportive and respectful he is of her being friends with her exes such as Brad Pitt, Ben Affleck and Luke Wilson. “Probably one of the things that [Falchuk] likes about me is that I believe in conscious uncoupling, whether you’re uncoupling with a co-worker, a spouse, a boyfriend, I really do believe that if you’ve invested in somebody ― and of course there are exceptions ― to amputate that relationship [shows that] maybe you’re not then fully letting the full lesson reveal itself and the healing happen,” she told Entertainment Tonight. “So even though sometimes it can be uncomfortable, I think it’s nice to work through it and reconnect with the value that that person brought to your life.” 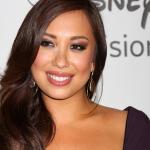 Cheryl Burke Recounts 2022, Saying It 'did Everything…