If your husband is sending these 7 texts, your marriage is in trouble

See the Signs Before It's Too Late.

When tension creeps into your marriage, how do you know whether it's temporary, or a deeper sign that something is terribly wrong? Pinpointing the cause is often easier said than done.

Pay attention to these subtle signs your husband may be sending through his texting habits. If these describe him, your marriage needs critical care.

If your husband is sexting someone else, this is obviously a huge problem. But actually, sexting YOU isn't a great sign either. Experts told the Huffington post that the happiest couples steer clear from sexting. They tend to send meaningful texts to their sweetheart instead. Unhappy couples are much more likely to focus on sexual texts.

Texting a female friend anything he wouldn't tell you

Your husband is going to text other women. It's unrealistic to expect him not to. But what is written in those texts is crucial.

If he is ranting about his day to her rather than you, he's on risky ground. He might have not been unfaithful yet, but emotional texting affairs are an easy trap to fall into.

Catching up with an old fling

It may seem like a harmless check-in, but why does he reallywant to text a former girlfriend? There's really no place for an ex in a relationship. If he wants to text an old heartthrob, he's most likely not feeling complete in your relationship. It's not your job to "complete" him, but you should be aware of when he feels this way.

His relationships may be 100 percent innocent, but obsessively texting anyone long-term is likely compensating for something missing in your relationship. He may feel lonely, invalidated or bored. Naturally, he wants to chat with his friends, but 200 texts a day to anyone is probably a sign he's unhappy about something in his life.

Texting you anything belittling

No one deserves to be belittled - especially by those who should love them the most. If you're getting these texts, you most likely already know your marriage is hanging on by a thread.

For every negative comment, it takes about five positive interactions to restore a good relationship. Negative texts may occasionally slip in, but they should be the exception rather than the rule. If the majority of his messages are negative, it's possible he's forgotten how to see your good attributes.

Texting any sort of threat

If his texts are threatening in any way, don't just ignore them; Get help. While the previous points are warning signs to help couples save their relationship before it's too late, this one is far past that point. Threatening is a form of abuse. Leave, and get help immediately. 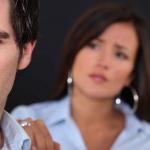 A Letter From a Happily Married Man to…