Is There Such a Thing as a Harmless Crush When You’re Married?

“Do you need help with those bags?”

I am walking past the Studio City Starbucks to my car, carrying two medium-sized shopping bags from Papyrus. Without looking up, I smile politely in his direction and shake my head “no.” Next, I hear his footsteps and briefly feel the warmth of his hand next to mine as he gently takes the larger of the two bags out of one of my hands ― he smells like a freshly laundered T-shirt.

It’s a move that I would typically shut down with an eye roll or maybe even find threatening. But for some reason, his playful cockiness just makes me laugh. I’ve seen him before at that Starbucks with five or six of the other coffee klatchers, playing dominoes in the middle of the day. But before this moment I’ve never really paid any attention to him.

As we walk, he tells me his name (Jerome), his age (four years younger than me), and how he’s just moved here from Alabama to pursue an acting career (read: he’s unemployed).

After we put the bags in the trunk of my car, he slowly looks me up and down. It’s then that I get my first really good look at him, and I’m startled by how much he looks like a young Denzel Washington. I fix my face quickly though, before it betrays any interest on my part.

Extending my hand politely, I shake his casually before getting in my car. I see him notice my wedding ring, and he pretends like he’s been shot in the heart.

“How long?” he says leaning backwards and holding his hand over his chest.

“Happy?” His smile is contagious, and I feel the corners of my mouth, responding.

My whole body gets warm and itchy while pulling out of the parking lot. I wonder vaguely if I’m having an allergic reaction to something.

I tell no one about my encounter with him. After all, I reason, there is no real purpose. He hasn’t done or said anything inappropriate, and I had conducted myself like a married woman.

But still, there is a twinge in my stomach, a combination of curiosity and something else I have a hard time putting a finger on ― guilt.

And here I was thinking I didn’t like being touched. For the past year or so, my husband and I had been seeing a $300-an-hour couple’s therapist named Cameron to address my post-pregnancy “intimacy issues.”

During our weekly 40-minute ride to her office, I would brace myself for the hour we would have to spend on Cameron’s tasteful taupe sofa. I knew when we’d arrived, he’d give Cameron a report about how many times I’d fallen asleep before he got home or eaten dinner with our 5- and 6-year-old sons instead of him. I knew he’d tell her how he’d discovered a nearly empty bottle of wine in one of my rainboots and that he was worried about me. Each session with Cameron felt like a confirmation of my deepest fears of inadequacy. I left her office every week feeling worse about myself than when I’d arrived.

In order to start getting better “reports” from him, I begin making an effort to try and eat dinner with him every night instead of the kids; I start waiting until he gets into bed at night before I set the sleep timer on the TV. I even give up drinking altogether to assuage his fears and be more present when he’s home.

But the truth is, I’m scared AF of being present. And I need those glasses of wine to be genuinely interested in anything other than my children and “The Sopranos.” And if I give up my best social lubricant, I don’t know how I can ever be the wife he wants me to be.

I begin to think that I am damaged beyond repair.

The day after my Jerome encounter, I find myself smiling for the first time in months while packing the kid’s lunches and excusing myself after giggling out loud while getting my nails done that afternoon. I haven’t felt this particular brand of euphoria since I saw my high school crush walk through the door of my freshman year English class. It seems inevitable that this nonsensical giddiness is going to blow my cover at home. My husband is a brilliant man; he always keys-in on even the slightest shift in my vibe, no matter how imperceptible it may be to others.

Can I do this? Can I like this man and not risk my marriage? I mean, what’s wrong with just having coffee together? Isn’t there such thing as a harmless crush, even when you’re a married woman?

My heart is pounding wildly as I get into the long line at Starbucks the next day around 1:00 p.m. I’d spied him sitting outside with a couple of older guys when I parked, but I’m not sure if he saw me. I’m trying to pretend as though I’m deciding between a chocolate croissant and a blueberry scone when the smell of fresh laundry suddenly envelopes me. I inhale luxuriously while keeping my face close to the glass case so he can’t see my big, cheese-eating smile.

Later on while giving the kids their dinner, I have an insane urge to call someone (anyone) and tell them how about Jerome, how he makes me laugh, how attentive he is and how the smell of him makes me lose my mind. I feel as though equal amounts of joy and guilt are surging through my veins like speed ― and they’re threatening to burst my heart open like a balloon.

I decide to take a quarter of an Ambien to help still the shakiness inside me, knowing that I have to normalize myself before I speak with my husband. I say a silent prayer of thanks that he’s on a work trip in another time zone, so my “act” won’t be scrutinized quite as closely as it would if he were home.

Three-and-a-half weeks into daily “coffees” with Jerome, my euphoric haze is fading, and my brain begins to buzz with a strange sense of apprehension shortly after I wake up. It’s not just that I’m afraid of getting caught, although the idea of it does make me jump like a stray cat. It’s more that the whole situation is starting to feel dangerous.

Even though we have yet to have more physical contact than our knees bumping accidentally/on purpose under the table or his casual hand on my shoulder as he walks me to my car, I feel as though I’m cheating on my husband. I hate the fact that I think about Jerome all of the time. I hate that I spend my evenings imagining what his lips might feel like against mine. I try to shake myself internally when I fantasize about what it would be like to slip into bed next to him, what our babies would look like, or what kind of father he’d be.

I feel as though I’ve been seized with a flu, a sickness that has hijacked my moral compass and is now threatening everything I know. I’m absolutely ill with this secret, and I find that I am utterly powerless over the idea of him. I begin to wish to God that I’d snatched my bag back from him that day and kept the hell going.

I know that this can only end badly. I can’t just keep meeting him for coffee, getting a “fix” before picking up my kids without consequence. Someone is going to catch feelings soon, real feelings. Which means that someone is going to get hurt.

One day, as I pull into the parking lot behind “our” Starbucks, I realize with a sudden jolt of clarity what else is really going on. When I decided to put down my evening glasses of wine a few weeks ago, I didn’t even bother to think about what I might be replacing them with. True, I’m not secretly getting drunk anymore before my husband comes home, but now I’m secretly getting loaded on a guy ― a guy who is really a complete stranger. I didn’t put anything down ― I only switched obsessions.

It takes a year to completely detach myself from the gravitational pull of my crush. Getting Jerome out of my system is like the most terrible detox, complete with bargaining (maybe I can just stop at Starbucks this one time), delusional thoughts (I’ll bet it’s been long enough that we can totally just be friends) and minimizing (it really wasn’t so bad; it wasn’t like we actually did anything wrong).

A married friend of mine recently told me about a crush she has on a coworker. I listened as she described all those familiar feelings: sudden adoration, the absolute intoxication of mutual flirtation and the guilt and shame she’s experiencing in between.

“What do you think?” she asked me. “Just an innocent crush, right? I’ll get over it?”

I tell her about my experience with Jerome. The rush of anticipation when I knew I was going to see him, the fantasizing about him (even while I was with him) and the pit of guilt in my stomach whenever I thought about hurting my husband or my children.

I thought mine was a harmless crush at first, but it wasn’t. It was insidious, like a poison infecting my home life, seeping in and taking over everything. My experience with Jerome showed me that, despite what I might think, I’m not actually built to metabolize the kind of excitement that I crave ― and I’ve accepted that about myself.

So I’m not saying that there isn’t such a thing as a harmless crush for you or somebody else, but I’m clear that there is no such thing for me.

And even though my husband and I eventually did get a divorce, I still avoid going by that Starbucks sometimes. It represents a time in my life when I was so full of fear and uncertainty that I compromised myself for the thrill of having a thrill. Something I never want to experience again. 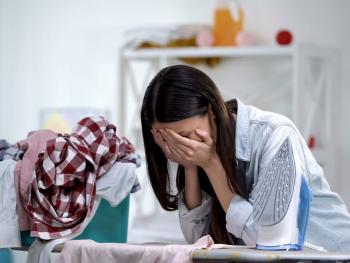 What is Martyr Complex? 6 Signs Someone in…