The message is what Affleck would sign his emails with when they first started speaking again.

Jennifer Lopez recently sat down for an interview with Zane Lowe for Apple Music where she revealed the heartwarming message engraved inside her engagement ring from Ben Affleck. “One of the songs that I wrote for the album, which is on the inside of this ring right here, my engagement ring that he gave me, it says, ‘Not. Going. Anywhere,’” she told Lowe when discussing her new album "This Is Me...Now." Lopez continued by saying, “That’s how he would sign his emails when we started talking again. Like, ‘Don’t worry, I’m not going anywhere.’"

The pair started dating nearly 20 years ago after they met on the set of their movie "Gigli" in 2001. They were engaged and set to marry in 2003 before they called off their wedding and eventually called it quits in 2004. Lopez describes their split as "the biggest heartbreak of my life." She spoke about the mass amounts of media attention the couple got early on in their relationship which ultimately played a role in their split. “No, it was a new thing,” Lopez told Lowe. “It destroyed us. That was part of what destroyed us, the outside energy that was coming at us. And we loved each other. It was hard. It felt at times unfair, but neither one of us is that person, to be like, ‘Woe is me.’”

The media attention doesn't seem to be affecting the couple this time around as they eloped in Las Vegas in July of this year. After their elopement, they held a ceremony in Savannah, Georgia with close friends and family, with only their five children from previous marriages standing with them at the alter. “They were the only people we asked to stand up for us in our wedding party. To our great honor and joy, each one did.” 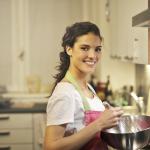