Losing weight for your sweetheart with the ‘Cruise Ship Diet’

Surveys Show That the Average Person on a Two-Week Cruise Gains 14 Pounds!

Going on an effective diet can be one of the best gifts we can give to our sweethearts (or to our children and our spouse)-it is the gift of a longer and better life together. Today we want to add a little to this thought in the form of what we now call...

The Sweetheart Diet, aka "The Cruise Ship Diet."

Talk about an oxymoron! Has anyone ever lost weight on a cruise ship?

Actually yes, someone has! We'll tell you who later.

Surveys show that the average person on a two-week cruise gains 14 pounds!* (an average of a pound a day!) It is the perfect environment for weight gain. Food everywhere, huge dining rooms and buffet lines, long hours at sea with nothing to do but eat, limited time and opportunity for exercise. There couldn't be a worse place to diet, right?

And having paid a lot for the cruise, people feel they need to eat a lot to get their money's worth.

But when you think about it, our normal everyday life has become a lot like a cruise ship. Food is so plentiful and available and cheap and fast. We are surrounded by food whether we are in our homes or driving down the street. It takes time to exercise-but not to eat! We can grab food fast, almost anywhere. Since time is scarce, we eat faster, but we don't eat less.

In the three earlier Sweetheart Diet columns in this series, we made the case that "portion control" is the key. Our basic premise there, and of Richard's new book The Half Diet Diet is that it is not so much about what we eat as it is about how much of it we eat; and the metaphor is that we need to bridle our appetites much as we bridle a horse to make it serve us rather than run away with us.

And the incentive and motivation for sticking with the discipline in eating and exercising that the diet requires comes from the fact that you are doing it as a gift to your sweetheart-the best gift there is to the person you love most! We thought that a cruise would be in line both with the "sweetheart" idea (we needed and wanted a second honeymoon) and with an acid test of whether the diet can work in the hardest dieting environment on the planet!

So, getting to the point about the cruise: by coincidence, we were scheduled to speak on a cruise in the South Pacific in early January, just at the same time that our diet book was being published. Someone suggested that if we really wanted to test the viability of the diet and the "four habits" that it suggests, we should try to implement them on the cruise. "Give it the acid test," our friend said, "if it works on a cruise, it will work anywhere."

So we did. For the 13 days we were on that floating food court, we practiced:

Maybe we were only able to do it with consistency because we had told the people we were traveling with what we were doing, and they came around to our table at every meal like clockwork to check on us and see whether we were actually eating only half of the food on our plates.

And guess what, it worked! Instead of putting on 13 or 14 pounds, we each lost a few pounds, and what we gained was an increased confidence that we can keep on doing it. We actually said to ourselves, many times, "if we can do this on a cruise ship, we can do it everywhere."

The only thing we lack, now that we are off of the boat, is all those folks checking on us and keeping us monitored and motivated.

So perhaps we can re-commit ourselves by telling you, our readers, right here in this FamilyShare column, that we are going to stick with this eat-half diet. And in the days and weeks ahead, either in reality or in our imagination, you might run into us in a restaurant or a food court or even in an airport-and you might be checking to see if we practice what we preach. And that very possibility might motivate us to keep working at it and to keep feeling as great as we always do when we just eat half.

Join us! If you do it right you will actually enjoy the half you do eat more than you used to enjoy the whole thing. And remember, it's for your sweetheart, and either now or in the future, for your spouse and your kids!

Note: This is the fourth and final article in the "Sweetheart Diet" series. Read part one, part two. and part three here. 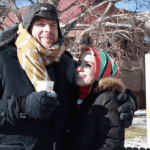 See Why This Muslim American Couple Wants to…