Shakira uploaded a photo of her bare feet and in minutes the criticism began; why do we do it?

The Photo of Shakira's Feet Posted on Instagram This Past Week Caused Criticism From Fans and Non-Fans Alike...why?

Shakira's Instagram photo of her feet is causing social media to explode with comments. It's hard to believe that with all the problems in the world that deserve our attention, many of us find time to harshly criticize others.

The beautiful and talented singer Shakira posted a picture of her feet on her Instagram page this past week and it seems like everyone had something to say about it.

The image depicts Shakira's bare feet, nails painted with blue polish and bronzed legs that abruptly stop in a "farmer's tan" to show a pair of untanned, white feet. Details aside, what really drew the public's attention was not the caption, or the tan lines referenced in the caption, but Shakira's toes.

While some fans defended her feet, the majority criticized them as if they were something truly horrible. Why do we criticize? It's a heavily debated topic, one that isn't new to society. Famous writer Oscar Wilde quotes: "The highest as the lowest form of criticism is a mode of autobiography", lending the idea that our hurtful comments about others secretly reveals how we think about ourselves.

People use criticism as a defense mechanism and choose to criticize objects that make them feel vulnerable. We continue to destructively comment, thinking we get ahead by doing so. Dr. Steven Stosny, explains: "Criticism is an easy way to defend the ego". In situations where we feel uncomfortable, it's easy to say something harsh to make ourselves feel superior.

How does criticism start?

It all starts in our minds. When we see, when we hear, or when we perceive something, we have the choice to entertain it positively, or negatively. Criticism is the cause of exercising wrongful judgment in our minds. Though it might be automatic and unconscious, it only gets worse the more it happens.

We develop addiction to criticism when our ability to empathize disappears

The more we criticize others, the harder it is to empathize. We focus so much on the bad in others that we ultimately blur our own vision and end up blind. We can't see the good. Brains are quickly programmed to only identify what they perceive as defects or faults. Though it might feel like it lifts us up, criticism slowly pushes people out of our lives. Criticism is often passed off as just telling the truth, or excused as some form of entitlement.

This is not the case

No one has the right to destroy with constant criticism. Whatever your intentions, criticism does not give you friends. It is a hurtful commentary on something you have no right to comment on. Hiding behind the "safety" of social media to criticize does not excuse your behavior.

It will be difficult if you have fallen into this habit, but make an effort to see the positive. Comment with good intentions. Choose to uplift those around you, instead of pushing people down to get ahead. We need to love others around us (and that includes their feet!). 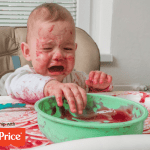 17 Hilarious Mealtime Pics to Get You Through…