Signs your spouse may have Bipolar disorder

This is the first in a two part series on how Bipolar disorder affects marriages. Learn how to diagnose the problem and get help.

"I was not depressed until I married him", the post I read said. "He faked it with me, long enough for us to get married. Now he lays in the bed constantly ... people think he is so NICE, so wonderful. He fakes it."

This was written by a woman trying to manage her life with, and around, a spouse who is dealing with the depressive side of Bipolar, what they used to call manic-depressive, disorder. What she has written may seem extreme to some. However, counselors dealing with those whose loved ones have bipolar disorder see it every day.

My friend Carl sometimes feels the same way, though he would admit that to few. Carl is married to a woman dealing with bipolar disorder. The real problem is that his wife isn't dealing with it at all. She has swung through mania to deep depression, and then back to mania for years.

The justifications his wife, Diane (neither name is real), makes for her thoughts, feelings and behaviors have become less and less creative recently.

"It's your fault," she says to Carl, her husband of 30 years. Not very creative. I don't know anyone in her position who hasn't blamed her spouse for a lot of things that aren't very nice.

I have known Carl for years, and I have seen this family interact with each other since he and Diane married. Carl is not a perfect guy. I'm sure that he has been at the root of a problem or two.

He came to me a week or two ago to ask me for advice. Apparently, when he thinks of mental illness, he thinks of me. He thought I would know what to recommend that he do because I have been loony for years.

Loony. Yes, I said it. I hate the word crazy because it doesn't really differentiate between one's depression and one's having a continuing conversation with the camper trailer. I have dealt with my own problems with bipolar for years - many, many problems. Looney seems to fit. Looney seems manageable.

I asked him to give me an idea - in his own words - of what was going on while I took mental note. Then, after a few minutes, I started taking real notes.

This is where I insert the disclaimer. I am not a doctor. But asking me about dancing-with-crazy is not at all like the blind leading the blind. I have been there.

I reiterated this to Carl as a disclaimer, that my knowledge comes through personal experience. I told him that he needed to get some professional help.

"That's the thing," he said. "We have tried that for almost a year."

Here is what he told me was going on with his wife, Diane.

Diane won't take any responsibility for her actions or behaviors.

She bounces around the house at odd hours while others are sleeping.

She blames others, mostly close family, kids and spouse - as in, "You're the reason I act this way."

She reinterprets events to her benefit. According to Diane, the reason she threw those scissors at her sister was because her sister was provoking her like she had "every day since childhood." And her sister was jealous of her to boot.

Diane has exhibited a "hyper sexuality." I didn't ask.

She is increasingly reckless in her spending.

She is impulsive way out of the norm.

Her mood swings are sometimes narrow in length and sometimes wide - as in months.

She can be charming in public while not very charming in private with immediate family. She is often uninhibited, almost intrusive, though her invasions are sometimes masked with charm.

She rages. Her anger is well known, in the family and out.

She is disorganized, moving from one thing to another, rarely finishing anything.

She is often not concerned with consequences of her actions.

At this point in the conversation I stopped writing things down. I recognized each one of these as symptoms and behaviors as something that I had exhibited. But Carl wasn't through. He then mentioned a few items that clinched it for me.

Diane is convinced that she is better than others, has a mightier spirit and spirituality than most and that here talents are greater than others.

She can't understand why her behaviors should affect others in the way they claim, therefore they are lying about her and to her. Or, and just as often, they are out to get her, and they all talk about her behind her back.

The reason she spent ten thousand dollars without even discussing it - was because everyone always underestimated her.

Time to see a doctor

My friend was able to convince his wife to see a doctor.

Having just listened to him tell me about some of her behaviors, I was surprised that she had seen the need for a doctor. Many in her position refuse to accept even the possibility that there might be something off with their own behavior, or way of thinking.

She hadn't seen it necessary. Carl had made it clear that if she saw a doctor they world stay married. He pulled rank, and puling rank takes strength.

Sometimes, when Diane agrees to take any prescribed medications, she stops after a month or two because she feels great, thinks she is all better or she doesn't want to become dependent on a pill. She has no need to stick with a medication because there is nothing wrong with her and the doctors are all quacks.

These behaviors are not unique to Carl and Diane's situation. They are serious life altering experiences. Many relationships have ended with these unresolved issues. Rather than stay in the crazy dance, some elect to cut losses and make another life. Some choose to tough it out while being proactive, like Carl.

Choosing to stay with a partner who has Bipolar Affective Disorder is a pledge to manage and maintain. It does not go away. But then, you did marry your loved one through sickness and in health.

Good news is that health is around the corner. 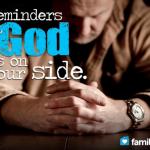 4 Reminders That God is on Your Side