Want Less Conflict and Unhappiness in Your Life?

Have you ever tried to spend time with someone, but instead spent time with yourself while they stood near you entranced by their phone? Tried to have a conversation, but was only met by silences and maybe the occasional "huh? Sorry, what were you saying?"? You're not alone. The phenomenon of being socially snubbed by someone using their phone is so common, it's been officially given a term: phubbing.

Even if you've never heard of the concept, phubbing is a social phenomenon that has been keeping researchers at Baylor University busy. Business professors James Roberts and Meredith David developed a valid scale of partner-phubbing (or Pphubbing), and surveyed 145 participants currently in relationships to determine both the prevalence of phubbing and its impact on interpersonal conflict.

The study found that the reaction to Pphubbing depended on the attachment styles of each individual. Those individuals who were anxiously attached (generally fear being ignored or abandoned) were much more likely to respond poorly to their partner using a phone or device than others. Hearing that, it seems easy to say, "well, it's my partner'sissue if my phone bothers them. They need to be less anxious," but attachment styles are only the tip of the iceberg.

Researchers also found that those who experienced the most phubbing in their relationships also tended to have more conflict, leading to more unhappiness in both their lives and their relationships. In blatant terms: Pphubbing does have a measureable effect on happiness, regardless of attachment styles.

Sure, it's easy to say "don't phub," but with how often individuals use their phones these days, it's definitely a case of "easier said than done."

So, what can you do to avoid Pphubbing?

Commit to your partner, not your phone

Make an effort to set aside your phone or device during bonding times with your partner. Put it on silent, or turn it off altogether. Even when you hear a notification jingle, ask yourself what really matters: my relationship or Facebook likes? If you find yourself worrying that people will feel ignored if you don't respond to their text, email, or message, let them know before quality time with your partner that you will be unavailable.

Delete certain apps that may be most distracting to you. Knowing that those apps are no longer available, can help curb the urge to reach for your phone. You can still access most apps through a computer and internet browser, so removing those apps doesn't necessarily mean a jump off the grid, only less distractions in your pocket.

Plan for time when you won't be using your phone. You may be surprised how many things you're missing by keeping glued to a device at all times. For one thing, you will be more available for conversations, especially if you're in a group or populated area.

Make it a game

When you are out to eat or at a social gathering, challenge everyone to not use their phones. Stack your phones face down in the middle of the table or room until an agreed upon time. Anyone who takes their phone from the stack before that time has to pay a penalty for losing. If you're out to eat, have them pay for everyone's meal, if you're at a party, they have to sing the national anthem while hopping on one foot with underwear on their head. Whatever will motivate people not to touch their phone and instead engage in the group. If no one touches their phone, congratulations, you've all won and spent more time building face-to-face relationships. 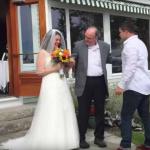 This Wheelchair-Bound Dad Surprised His Daughter by Getting…